5 Tips for a Winner's Brain 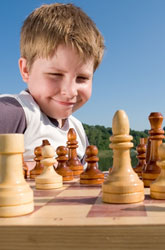 Success: it's what every parent wants for their child, and according to two researchers, anyone is capable of achieving it. Researchers Jeff Brown and Mark J. Fenske say that contrary to popular assumption, people aren't just born into lucky circumstances that create winners; anyone can train their brain to think like one. Here are some suggested tactics from their new book, The Winner's Brain, that your child can harness to succeed, no matter what her definition of success is:

1. Be Resilient. Show your child that, as easy as it is to mope about failure, it's just as easy to examine what worked, what didn't, and what you can do better next time. “A winner's brain recovers from life's challenges by dealing with shortcomings, misfires, and failures whether they are self-generated or brought on by circumstances beyond one's control. Winners reframe failures so that they work to their advantage and recognize that when things don't go according to plan the journey isn't necessarily over—and in fact failure is often a new opportunity in disguise.”

2. Narrow Your Focus. Brown and Fenske liken the idea of narrow focus to a racehorse wearing blinkers to shut out distractions in their surroundings. Your child can try distracting herself temporarily with a simple meditation exercise: disconnect from your project to take notice of the little things in your surroundings—the sounds, the sights, the smells. When she returns to her project, she'll be able to zoom in on what she's doing.

3. Engage Your Opportunity Radar. Opportunity Radar is the ability to turn something that most people would perceive as a failure or an inconvenience into inspiration. “Winners are continually scanning for blips on life's radar screen, and when a blip looks interesting, they investigate,” say Brown and Fenske. Brown and Fenske cite George de Mestral, the Swiss engineer who invented Velcro after removing some mountain thistle burrs from his dog's fur, as an example of someone who made use of a finely-tuned Opportunity Radar. “People with exceptional Opportunity Radar recognize that opportunities don't always come gift-wrapped; more often than not they come wrapped in a problem or an idea that everyone else has simply missed.” Encourage your child to develop her radar by embracing the aspects of an attempt that did work and expanding upon them, rather than throwing in the towel at the first sign of defeat.

4. Take Care of Your Brain. “Optimal brain function is not a case of nature trumping nurture. It's also how you nurture what nature gave you...and it turns out what is good for the body is usually good for the brain (which is after all a part of the body). We've identified four brain-care habits that are of particular importance for a healthy brain: physical activity, providing your brain with rich and meaningful experiences, eating a brain-healthy diet, and getting plenty of good sleep.” Most pediatricians recommend an hour or more of physical activity and between 10 and 14 hours of sleep for school-age children. Rich and meaningful experiences can be obtained through extracurriculars or hobbies. Foods rich in Omega-3 and -6 fatty acids, found in many lean meats and oils, and antioxidants found in fruits and vegetables, are Brown and Fenske's picks for the best brain food.

5. Reboot Often. “If you find yourself in a slump with something you're normally good at, try a reboot. Take a few lessons, read a book geared toward beginners, or practice some basic drills. Top athletes we've spoken with do this frequently, but it also applies to just about any skill or task where you find yourself stuck in a rut.” For your child, this can mean wiping the slate clean and going back to basics. If your child is struggling in math, suggest that she start her next round of studying with simple addition and subtraction problems, and work her way back up to speed.

These tips excerpted with permission from The Winner's Brain by Jeff Brown and Mark Fenske (Da Capo Lifelong Books, 2010).

Next Article: Getting the Best Help for Your High Schooler
We enable strictly necessary cookies to give you the best possible experience on Education.com.Cookie policy