Log in with different email
For more assistance contact customer service
Child and Adolescent Development
6 Things No One Told You About Bullying: Our Experts Weigh In

6 Things No One Told You About Bullying: Our Experts Weigh In 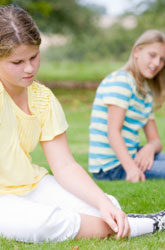 "Bullies are usually insecure themselves." Right. Like we haven't heard that before. It's one of those factoids usually offered up to help the victimized feel better about their situation as a bully's punching bag. But bullying is nowhere near as simple as it sounds. In today's culture, bullying is a complex behavior cultivated over years that has a lasting effect. Whether you're the parent of the tormentor or the tortured, there are some things you need to know about bullying, straight from the experts.

1. Bullying is a culture. That kid who torments your child on a regular basis didn't just wake up on the wrong side of the bed. Bullying is a behavior that is cultivated over years of issues. Kris Gowen, an adolescent mental health researcher and expert, warns, "I think one of the most important things to remember is that a large number of children who are bullied are also bullies themselves, and vice versa. In other words, there are no simple lines of victims and perpetrators, but rather a culture."

2. Many bullies have high self-confidence. Parents often assume that the only type of child who feels the need to bully is the one who has low self-esteem. "This is one of the most difficult myths about bullying to overcome," notes bullying expert Meline Kevorkian. "High self-esteem can mean that a student can be either a positive or negative leader. In other words, we cannot assume that a student who thinks well of him or herself is not a bully, because he or she can use that self-confidence either to bully or defend victims."

3. Victims are often bullies themselves. When it's your child being bullied, it's hard to believe that he would ever reciprocate that behavior toward another. But often victims turn around and bully others in retaliation or to justify their lot in life. "Sometimes when a bullied student is otherwise unable to stop the bullying, the victim may in turn exhibit those behaviors to others," says Kevorikian.

4. Bullying issues don't stop at graduation. "It'll only be a problem until he's done with school and then we'll all forget about it." If you have used this mantra as a method of consolation, rethink your policy. Social anxiety expert Signe A. Dayhoff doesn't take the long-term effects lightly. "Bullied children, and later adults, may experience social anxiety, depression, anger and lack of assertiveness, self-esteem and self-confidence, hindering their ability to trust and form happy relationships," she says. "They may not even know why this is."

5. Bullying doesn't always happen on the playground. When you were in school, you could leave issues with other kids on the playground after the bell had rung. Unfortunately, with today's technology, it's a whole new ball game. "Bullying can occur easily from an isolated room, via Club Penguin or Facebook," leadership coach Tim Elmore warns parents. "And almost every kid has a computer to do this if they choose to. Sexting is a growing form of bullying; more than 60 percent of teens say they've seen inappropriate photos of students they know. In some ways, the situation is not unlike giving a weapon to a child. The damage can be huge."

6. Not all bullies leave black eyes. Bullying is usually associated with physical and verbal abuse, like pushing, shoving or calling names. "Others behave in a more reserved manner, not wanting to be recognized as tormentors," relates Mary Muscari, parenting expert and associate professor at Binghamton University. "They control with soft talk and lies, saying the 'right thing at the right time,' and they draw their sense of power carefully through deception." Just because your child doesn't seem aggressive doesn't mean he's not a bully, and just because you don't see a black eye doesn't mean he's not a victim.

So what's a parent to do in a world of playground sharks and classroom tormentors? The best moms keep their eyes peeled and their ears open for any bullying talk or changes in their children's behavior. Hey, it's not hopeless. Both bullies and victims can be rehabbed if the problem is caught in time and parents remember that bullying isn't as cut and dry as previously thought. Looking at the bigger picture allows you to protect your child and banish bullying as a part of your lives.