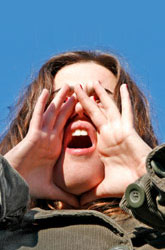 For far too many of us, the word “civics” conjures up images of a dusty, beat-up textbook. As adults—voters, tax-payers and jurors—we’d like to think that we have this “what it means to be an American” thing down. But what about our kids? A 2006 study by the University of Connecticut revealed that even at America’s top schools, there are disturbing gaps in college students’ awareness about government and how it works. The Constitution does not have to be relegated to the classroom. In fact, it probably shouldn't be: if we teach civic education to our children from textbooks, they might only remember it for the unit test, but if we teach children to love democracy through participation and fun, they’ll not only remember it for life, they'll practice it. Here are some ideas to help lift civic education off the page:

Four-year-olds probably won’t understand the electoral college or the filibuster process. What they will understand, however, is fairness and playing by the rules. Don’t be afraid to explain politics when your child asks about it—no one ever grew a civic conscience by being told “it’s just too hard for you to understand”— but explain in terms that she will understand. These two activities are especially timely for the inauguration and President’s Day:

Decide first how many cards you want in your memory game—for very young children, you’ll probably want no more than 10, but for older children, you might want to go all the way to 88. Pair the cards off evenly; for each pair, glue a picture of the president on one card and his name or a fact about him on the other. In honor of the inauguration, you may put a picture of Barack Obama on one index card and “1st African-American President” on the other card. Shuffle the cards and place them face down on a flat surface. Have kids play the game by matching the president to his name or fact.

Some variations on the game include matching past presidents who appear on currency to their coin or bill amount (Lincoln to the $5 bill, for example), to their term of office, to their First Ladies . . . the variations are endless.

State of the Union Stationery

When Barack Obama takes office this January, he’ll be writing on official presidential letterhead. Help your kids make stationary worthy of this great office by following the steps below:

First, discuss with your child traditional symbols of the United States. As adults, we may take it for granted that kids understand American iconography, but many pledge allegiance to the flag every morning without knowing what the stars and stripes actually mean. A primer:

Once your child understands some of the meaning behind these American symbols, have her use symbols to create her own presidential letterhead. Measure off about 2-3 inches at the top of the blank paper and draw a light line using the ruler. Leave everything under the line blank for writing on later; above the line, have your child use markers and glitter to create a design fitting for the Oval Office.

Now that your child has patriotic letterhead, encourage her to do her civic duty and write a letter to an elected official who represents her—a mayor, a senator, or maybe even President Obama himself!

Many avenues exist for showing teenagers about how voice works in democracy beyond high school government class. Sit in on an advisory council, homeowners association or parent-teacher organization, and let your child tag along. Find an issue that affects your child and write a letter together to the editor of your school or community newspaper. With due thought and preparation, you may even want to consider teaching your child how to properly participate in a little civil disobedience by engaging in the live classroom of a peaceable demonstration. Educate your child on protest propriety and make sure she understands why you feel it is important to be there. Better yet if it’s an issue that is meaningful to her, too—a rally against the local school board’s cuts to programs your child enjoys, for example. Instead of focusing on the setback, help your child focus on the many positive, safe and active ways to affirm her dissent. How better for children to understand the Constitution than through exercising the freedoms it gives them?

It doesn’t take an activist to raise a civic-minded kid . . . but being a good example means no more “forgetting” to vote in primary elections or finding creative excuses to get out of jury duty! When parents simply take their municipal responsibility seriously, then chances are good that their kids will, too. We owe it to our children—and our nation— to raise the next generation with a strong sense of democratic obligation and pride.