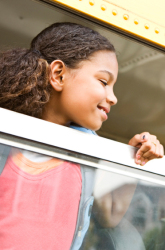 Nationwide, children six years old or younger are required to be buckled into some kind of car seat, booster seat or child restraint system in the back seat of cars. Some states even require a child restraint system up through age eight. So why is it that only a handful of states mandate the presence of seat belts on the buses that take these same children to and from school every day?

Considering the fact that 24 million students are transported twice daily to-and-from school via yellow bus service, and nearly 10 billion student trips are provided annually by more than 450,000 yellow school buses, parents have the right to be concerned about school bus safety. So how do you know if the school bus your child rides each day is really safe?

But before you design your day around driving your child yourself, consider this: according to the National Highway Traffic Safety Administration (NHTSA), currently school bus travel is the safest form of motor vehicle transportation, with a fatality rate that is nearly six times lower than passenger vehicles. On average, fewer than eight passengers die in school bus crashes every year, compared to 600 school age children who are killed annually riding to and from school in motor vehicles other than school buses.

That said, with the pains parents take to make sure their children are buckled in, it would be nice to know they can be buckled into their bus seats just as securely. According to the Governor’s Highway Safety Association, all 50 states, the District of Columbia, Guam, the Northern Mariana Islands and the Virgin Islands have child passenger safety laws. But only six states seem to be taking things seriously when it comes to school buses. California, Florida, Louisiana, New Jersey and New York now have seat belt requirements for school buses, and Texas will require them on buses purchased after September 2010. But what about the other 44?

The NHTSA has made great strides to improve and ensure the safety of this country’s children. But the rule still has to go into effect, and it will be a year after that point when schools will have to enforce the new regulations. If you are concerned about your child’s school bus safety in the meantime, contact your local school district. Ask about their plans to retrofit their large school buses and find out what they are doing to ensure the children’s safety while you wait for those seat belts. Are they carefully testing all bus drivers? Are the routes to and from schools the safest ones?

What with the social pressures and academic stress surrounding your child's school day, the last thing you need to worry about is their physical safety on their way there. So ask the right questions now, to ensure a smooth ride before safer buses roll up.

Next Article: Child Abuse Prevention Tips
We enable strictly necessary cookies to give you the best possible experience on Education.com.Cookie policy