The Art of Apology 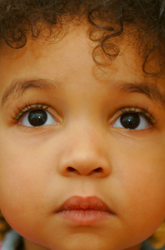 "But I didn't mean to do it"  or "she did it first." How many times have you heard your child say these words? Probably too many times to count. You've probably even followed up with your own insistent words: "Say you're sorry!"   When children do something hurtful our parental instinct is to make them apologize to the injured party. However, it isn't saying "I'm sorry" that children need to learn so much as it is feeling sorry.

Clinical psychologist Laurie Zelinger thinks that asking preschoolers to apologize may satisfy a parent's need to feel as though they've taken appropriate disciplinary action. However, she thinks that it's not reasonable to expect a young child to understand how another person is feeling.  "Many parents make the mistake of asking, 'How do you think so-and-so feels when you hit him?' with the expectation of an apology to follow," she says. "The problem with this is that 4-year-olds are egocentric and cannot envision what another person feels."

Not everyone agrees with her view.  Aaron Cooper, PhD, clinical psychologist and author of "I Just Want My Kids To Be Happy: Why You Shouldn’t Say It, Why You Shouldn’t Think It, What You Should Embrace Instead," feels that learning to apologize is a crucial step in gaining the skill of perspective-taking.  Or, in more familiar words, standing in the other person's shoes.  "Perspective-taking," explains Dr. Cooper, "promotes empathy, the all-important inhibitor of human cruelty. It's empathy that makes an apology sincere and heartfelt."

Cooper agrees with Zelinger that a rote apology isn't worth much. "Who hasn't been doubly injured by an apology that felt forced or meager?" he points out. But he does believe that parents need to model an apology in their children's presence to help emphasize the need to make things right. It's important to note, though, that apologizing for your child's actions is not the same as making your child's apology for him. Instead, it's a way to teach the components of a sincere apology and to show him that sometimes you need to make amends for hurting people's feelings or property.

In fact, Cooper suggests that parents use incidents as a way to practice perspective-taking. He suggests having a dialogue about what happened after everyone has calmed down and offers some questions to help your child think about what happened. Once you've talked through all the possible answers, it's easier for your child to put together a sincere and empathetic apology. Ask her:

An easy way to help your child craft a heartfelt apology is to make sure she's considered the 4 As. Though it's not always necessary for a child to make concrete amends, such as replacing a broken toy, it is important for her to acknowledge what she has said or done, accept responsibility for her actions and provide an alternative response for the next time. For example, if the incident involved a broken toy, she could say something like, "I'm sorry I broke your toy because I was mad at you. I shouldn't have done it and next time I'll tell you I'm angry instead."

So, the next time your child does something wrong, bite back the urge to insist he say "I'm sorry." Teaching him the art of apology will help him in the long run.  "Parents who rear empathic children--kids who can imagine how the world might feel standing in another person's shoes--equip those kids with a skill that contributes to success in marriage, in friendship, in workplace and family ties," says Cooper. What else could you ask for?

Next Article: Teaching Tolerance
We enable strictly necessary cookies to give you the best possible experience on Education.com.Cookie policy