Asperger's in the Classroom 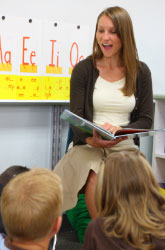 Asperger’s Syndrome, a neurobiological disorder on the Autism spectrum, is one of the fastest growing disabilities, according to Brenda Smith Myles, Ph.D., Chief Program Officer for the Autism Society of America. “Right now, the prevalence is 1 in 150 children,” Smith Myles says. “There are several studies that are ongoing at this time; it appears to be genetic with environmental triggers, but we don’t know what the triggers are.”

What is more apparent are the challenges this disorder presents to an individual’s social maturity, social interaction, language communication, behavior regulation, and sensory perception. Children with Asperger’s often have difficulty developing appropriate peer relationships, they may have trouble with organization, and they often rely heavily on routine.

“The majority of our kids are diagnosed between the ages of 9 and 11,” Smith Myles says. “The trouble is that by middle school our kids are misidentified, for example, as having learning disabilities or behavior disorders.”

Smith Myles emphasizes the importance of evaluations for young children and youth who show the symptoms of Asperger’s. “If the child is of school age, he or she can be evaluated by the multidisciplinary school team,” Smith Myles says. “According to federal guidelines, children with Asperger’s can be identified by the school without a medical diagnosis, and they can receive services.”

When children are supported to understand their strengths and limitations at an early age, they operate from a strong foundation and are better prepared to advocate for themselves. Susan Golubock, an occupational therapist and founder of Making Sense of Autism, a private consulting service, says early intervention is key with Asperger’s Syndrome. “Children who are identified as having Asperger’s early on have an easier time adjusting because they don’t have to unlearn maladaptive behaviors or habits,” she says.

What are the signs to look for in young children? Smith Myles suggests the following:

Sound like your kid? Not to worry. “All of us have some of these characteristics,” Smith Myles says. The important thing is to compare your child to other children of the same age—and to trust your instincts. If you feel your child may present more symptoms than his or her peers, visit with your pediatrician.

Golubock warns, though, that pediatricians are often reluctant to diagnose children with Asperger’s because they want to see if they’ll outgrow it. “Don’t necessarily stop with the doctor,” Golubock says. “Many states have early intervention screenings. I would encourage parents to use these screenings before they reach school age.”

Services for Children with Asperger’s

Services include speech language pathology, occupational therapy, special education from a special educator, and sometimes counseling. Smith Myles explains that the services are sometimes direct and are sometimes provided through consultation—meaning a speech pathologist might work with the general educator to ensure that the environment is structured so the child can be successful. “Our children are visual learners,” Smith Myles says. “The occupational therapist might work with the teacher to make sure there’s visual support and that the language is at a level the child can understand.” As an example, if a teacher says, “Hurry up,” a student with Asperger’s might get up from his or her seat and run, which might result in the child getting in trouble for running.

“It’s important for the teacher to understand the child with Asperger’s and to understand his characteristics,” Smith Myles says. “They manifest differently, and some may be more pronounced than others.”

Since most children with Asperger’s are served in the regular classroom, and since general educators are not trained to work specifically with children diagnosed with Asperger’s, regular parental involvement is necessary. Golubock calls this regular involvement “polite persistence.”

“Parents have the right under the law to call IEP (Individualized Education Plan) meetings any time they want,” Golubock says. “I’ve had parents who demanded one every single week.”

Golubock explains that the polite part of the equation involves parents recognizing that teachers have a whole classroom they’re serving—that their child is not the only student. “You don’t want to become a problem parent,” Golubock says. “Keep asking, and after a while, when you ask politely and offer to help if necessary, they’re going to be embarrassed because they haven’t done it. They’re going to be motivated.”

Like the IEP, CAPS (Comprehensive Autism Planning Systems) is another tool to help parents and educators lay out a child’s daily schedule, delineating the specific interventions the child needs. “Parents should follow up to make sure that interventions are implemented throughout the day,” Smith Myles says. CAPS is a framework that indicates the supports that are needed in terms of structure modification, communication support, and sensory support; data that are supposed to be taken; and how skills are going to be generalized. “It’s an amazing tool,” Smith Myles says. “Parents and teachers are involved in creating the CAPS, which empowers parents to be a part of the process and to follow up on a regular basis. Students can also use the tool and can begin to understand themselves and advocate for themselves.”

For more information about Asperger’s symptoms and support services, Golubock recommends checking out the Online Asperger’s Syndrome Information & Support and the Autism Society of America.

Next Article: Identifying Students with Special Needs During the School Years
We enable strictly necessary cookies to give you the best possible experience on Education.com.Cookie policy