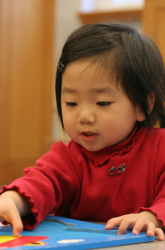 If at the next doctor's visit your pediatrician says she wants to screen your 18-month-old for autism, don't panic. She's just following new recommendations from the American Academy of Pediatrics (AAP), which says, effective immediately, that  every child should be screened for autism at 18 months and again at 24 months.

What's the rush? Though the field of autism research is full of controversy, everyone agrees on one thing: the earlier a child with autism starts therapy, the better the outcome. These new recommendations from the AAP, an organization of over 60,000 pediatricians, could mean a huge difference in the lives of millions of families.

The Center for Disease Control and Prevention estimates that 1 in 150 children in the United States has a form of autism, a disorder affecting the development of language and social skills. Early intervention can have a great impact on a child's ability to function in a regular classroom without the help of an aide, and to interact with peers.

In a nutshell, the new report recommends that all children, not just those who exhibit speech delays or those with concerned parents, be screened for autism at their well-baby visits. Just as pediatricians ask parents if their 18-month-old is talking and if he's walking, they'll now also ask parents about any social or language deficits.

The recommendations, co-authored by Dr. Chris Johnson and Dr. Scott Myers, address the warning signs of autism and encourage doctors to assist families in effective intervention. The AAP has also developed a tool kit to help doctors conduct screening and surveillance: chock full of everything from formal evaluation tools, to less formal tests, such as asking the child to follow a doctor's finger with her gaze.

Peter Bell, Executive Vice President of Autism Speaks, a national advocacy organization, says the AAP is taking a huge step in the right direction. “There have been millions of stories of parents expressing their concerns early, and they've been told to wait and see. Those kids lost months and years of valuable behavioral interventions,” Bell says.

As a parent, it's important to be aware of the warning signs of autism, and speak to your child's doctor if you notice any of them. According to the AAP, here are the red flags, age by age:

Other, more subtle signs that should be considered include:

Dr. Wayne Yankus, a community pediatrician in New Jersey, says this report reinforces the need for pediatricians to really connect with parents about symptoms, rather than ticking off a list of milestones on a piece of paper. “Visits are getting tighter and shorter under managed care, and this treatise brings us back into focus with the parent,” he says. Yankus says he plans to start opening his visits by asking parents if they have any developmental concerns, and encourages parents to do this with their own pediatricians.

Should autism be diagnosed, doctors will now have a set of tools to guide families through the treatment phase. “It used to be doctors would give a diagnosis and say, 'good-bye and good luck'. This is a complete 180 from that,” Peter Bell says.

The AAP also recognizes in this report something parents have tried to get through to the medical community for many years: that intervention can take many forms. While some parents may consider pharmaceuticals, others will want to explore complementary and alternative medicine options, like vitamin and mineral supplements and diet restrictions. The report says doctors need to be more willing to give balanced advice to their patients. This means that even if your pediatrician doesn't think a gluten-free diet will work, he will still discuss the pros and cons with you.

However, parents need to hold up their end of the bargain by keeping their doctors in the loop, says Yankus. “If there's something you would like to try, tell us. I want to give it a whirl, but want the child to be safe,” he says.

These recommendations are now the gold standard for AAP, and that means from now on it's a parent's right to ask for autism screenings. It's a small, but collaborative step in recognizing the signs early, and getting help for children sooner, rather than later.

For the AAP's autism checklist, go to: http://www.utmem.edu/pediatrics/general/clinical/m-chat.pdf

Next Article: Diagnosing Autism: One Family's Story
We enable strictly necessary cookies to give you the best possible experience on Education.com.Cookie policy