Log in with different email
For more assistance contact customer service
Physical Health
Childproofing Your Home
Bisphenol-A: What you Need to Know

Bisphenol-A: What you Need to Know 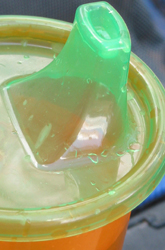 Bisphenol-A: probably not a chemical you’d given much thought to before recent reports labeling it as a possible danger to babies and kids. When the Canadian government declared it a potential toxin and banned it from baby bottles, parents everywhere began wondering what their children had been exposed to. The bad news? It’s everywhere. The good news? There’s probably no need to panic.

BPA is a chemical used to manufacture polycarbonate plastic. It's durable, inexpensive, and doesn’t absorb flavors. For that reason, it’s been used in everything from sippy cups to “microwave safe” storage containers. Look around your kitchen; anything made of hard, clear plastic, or labeled with a “7” in the recycling triangle probably contains BPA unless the label says otherwise. Most canned goods, even organic foods, are packaged in cans lined with epoxy containing BPA. In fact, it’s used so widely that a 2003-2004 Center for Disease Control and Prevention study found BPA in the urine of 93% of participants.

However, experts say the amount that leaches into the body is extremely low. Gerald LeBlanc, PhD, Head of the North Carolina State University Department of Environmental and Molecular Toxicology, says: “Parents don’t need to completely avoid sources of BPA, but should minimize exposure whenever practical." The reason? Recent studies have shown that rat pups exposed to BPA showed changes in mammary and prostate tissue, and female mice exposed to BPA reached puberty sooner, implying it may cause cancer.

Before you toss everything, take a deep breath. “I don’t see this as a big issue for families with school age children,” says Simon Hayward, Associate Professor of Urologic Surgery and Cancer Biology at Vanderbilt University Medical Center. “We can’t affect the past, and in any case there is no strong evidence that there are harmful effects. The present hubbub is more about taking precautions – which is not a bad thing, but can result in undue angst.”

It’s worth noting that while the research is real and merits careful consideration, this health scare has economic winners and losers just like any other. “We have absolutely seen a surge of interest in alternative plastics and other materials over the past few years,” says Joe Dickson, Quality Standards and Organic Program Coordinator for Whole Foods Market. Sigg, a Swiss company that sells $18 metal cups popular with the preschool set, told the New York Times that its sales are 5 times what they were at this time in 2007. But, you don’t need to spend a fortune to keep your kids safe; discounters like Walmart and mainstream companies like Playtex have begun phasing out baby products containing BPA.

That said, here are some simple steps you can take to limit your family’s exposure to BPA.

Scary? Definitely. But when it comes to your family’s health, common sense is more important than hype. As Hayward says, “driving is probably much more dangerous than problems associated with BPA.”

Next Article: Baby Proofing Your Home: The Do's and Don'ts
We enable strictly necessary cookies to give you the best possible experience on Education.com.Cookie policy