Why the Boy Scouts Matter 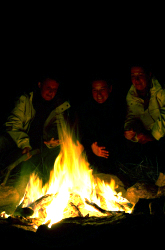 Hey parents, how would you like to hear your teenage son utter these words:

On my honor I will do my best To do my duty to God and my country and to obey the Scout Law; To help other people at all times;  To keep myself physically strong, mentally awake, and morally straight.

As amazing as it might seem at times, millions of boy scouts recite this Boy Scout Oath or Promise every year. That, along with the Scout Law, which states that scouts are "trustworthy, loyal, helpful, friendly, courteous, kind, obedient, cheerful, thrifty, brave, clean, and reverent", pretty much sums up what boy scouting is all about – the quest to develop good citizenship, good character, and good physical fitness in boys.

The program is something that clearly excites boys. From the Cub Scouts, which welcomes 7 to 10 year-old boys, to the Boy Scouts, which is for 11 to 17 year-olds, scouting and its numerous associated programs are full of fun and stimulating activities and challenges. There is a heavy emphasis on camping and learning outdoor adventure skills, as well as service projects, close peer camaraderie, mentoring by enthusiastic adults, and the promise of earning merit badges and rank advancement.

The Boy Scouts are the largest voluntary youth movement in the world, with more than 25 million members worldwide – including over 2.8 million youth involved in the United States. The concept of scouting is based on the ideas of British founder and Lieutenant-General Sir Robert S. S. Baden-Powell and his 1908 book Scouting for Boys, which emphasized outdoor life and service to others. And, according to Kent York, marketing and communications director for the Twin-Cities-based Northern Star Council of the Boy Scouts, things haven't changed much over the last 100 years. "The basics - the idea of leadership, the scout oath and scout law are pretty much the same. Technology has changed, [but] the idea of giving kids responsibilities, peer leadership, setting high standards for their personal conduct and responsibility, are all the same."

Many boys who become involved in scouting continue their involvement well into adulthood by continuing to work with and support the program. York points out, "One of the beauties of scouting is the intergenerational-ness of it. You have kids whose fathers and grandfathers were scouts." York estimates that around half of all men in the United States have been involved with scouting at one point in time.

While most boys who enter scouting do so purely for the fun of it, a report commissioned by the Boy Scouts called "Values of Americans: A Study of Ethics and Character", reveals more lasting benefits. Most adult men who were scouts as boys credit the program with their developing positive character traits such as "being a good team player, always being honest, taking better care of the environment, respecting the life and property of others, having pride in their country, respecting the elderly, and having confidence in their abilities." And, the longer a boy spends in scouting, the greater the positive effect reported as an adult. The report also shows that men who were Scouts are more likely to have higher earnings and a higher level of education than the never-been-scouts, and to be more satisfied with their personal lives and their jobs or occupations, among other benefits.

So if you're looking for a fun and action-packed program for your son – or maybe an antidote to TV addiction - you might want to consider the Boy Scouts.

Next Article: Why the Girl Scouts Matter
We enable strictly necessary cookies to give you the best possible experience on Education.com.Cookie policy