Log in with different email
For more assistance contact customer service
School and Academics
Helping Your Child With Social Studies/History
Bring the Civil War to Life!

Bring the Civil War to Life! 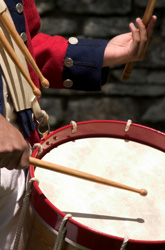 The Civil War was a pivotal event in American history, yet many of the subjects it raises – slavery, state’s rights, and violence – are difficult to talk about with kids. Here are some easy projects to get the conversation started. Little Drummers While today’s children may enjoy staging mock battles, warfare was no game during the 1860’s. Nine-year-old John Lincoln Clem survived two wounds and Confederate imprisonment to become the youngest non-commissioned officer in Army history. Like Clem, most boys started as drummers, calling soldiers to meals, waking them in the morning, and rallying them for marches. You can make a Civil War style drum, too. You’ll need:

Decorate the paper with symbols of your hometown. Glue the paper to the box, trimming if necessary. Use a pencil to punch a hole on either side of the cylinder near the top (if using a coffee can, you’ll need a nail.) Loop enough yarn through so the drum can hang comfortably around your child’s neck and knot it. Then use more yarn to tie cloth as tightly as possible over top and bottom of drum. Beat with bare hands or wooden sticks. Little Bakers Soldiers on both sides lived mainly on long-lasting biscuits called hardtack or “teeth dullers.” Many suffered from illness and were so hungry they willingly ate hardtack infested with bugs. Courtesy of Gettysburg National Military Park, here’s a recipe to make your own (bug-free!) version. Ingredients: 2 cups of flour 1/2 to 3/4 cup water 1 tablespoon of Crisco or vegetable fat 6 pinches of salt

Mix the ingredients together into a stiff batter, knead several times, and spread the dough out flat to a thickness of 1/2 inch on a non-greased cookie sheet. Bake for one-half an hour at 400 degrees. Remove from oven, cut dough into 3-inch squares, and punch four rows of holes, four holes per row into the dough. Turn dough over, return to the oven and bake another one-half hour. Turn oven off and leave the door closed. Leave the hardtack in the oven until cool. Remove and enjoy! Follow The North Star Escaping slaves didn’t have maps or compasses to guide them through miles of hostile territory to freedom in the North. They followed Polaris, the North Star, and relied upon the kindness of strangers along the Underground Railroad. Moss usually grows on the north side of trees; birds migrate north in summer; and by locating the edge of the Drinking Gourd (what we call the Big Dipper), people were able to locate Polaris, which always points north. While the concept of slavery may be too heinous for young children to comprehend, even a youngster staring up at the night sky can imagine the courage it would have taken to follow the stars to freedom all those years ago.