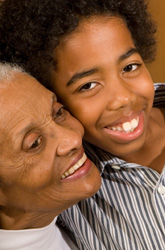 Grandma and Grandpa, Grammy and Grampy, Mimi and Poppa ... Whatever your kids call their grandparents, they probably know that these people are Mom and Dad's parents. But do they know that they're people with interests of their own, with histories and great stories to tell? Grandparent's Day shouldn't be the only time kids can get to know Grandma and Grandpa as individuals and to build some generational bonds. Building those bonds, however, is a multi-generational effort.

Stuart Gustafson, author of Questions to Bring You Closer to Grandma & Grandpa, says building bonds across generations isn't always easy and necessitates getting everybody involved. "The first thing is to realize is that every discussion that crosses generations is a difficult task," he says. "Bridging the gap between children and their grandparents (or vice versa) is a two-way street, with one obstacle - the generation that is in the middle."

It's not that the generation in the middle--parents--prevent bonding: it's more that it's difficult to create a relationship that's not facilitated by parents. It's not unusual for young children to think of their grandparents as an extension of their parents. After all, that is the context in which they visit with them and, to a degree, the context in which grandparents are introduced. That's not a bad thing, though.

Knowing that parents also have parents is a great way for children to start learning about family relationships and to be able to understand that Mom and Dad belong to a larger, more extended family. And as children get a little older, their natural curiosity about what their parents were like as kids is a wonderful way to begin learning about and forging an independent relationship with grandparents. Gustafson stresses the importance of "starting the conversation" to hear those stories and get answers to questions.

Grandparents, he says, can start the conversation, but it's probably not going to be received in the same way as if it was child-initiated. "Grandparents are telling kids these things and it's like 'yeah, yeah, yeah' and then it sounds like it becomes a lecture and that goes nowhere," he says. But, he warns, it's also important not to completely bypass Mom and Dad in the process. "If all of a sudden you're writing letters, calling on cell phones and sending IMs to Grandma, parents can be taken by surprise and they may be offended by it," he explains.

So, how can you all work together to begin the conversation? Gustafson says there are two approaches: the "soft" approach and the "hard" approach. The "soft" approach starts the conversation assuming you (or your child) are already familiar with some of Grandma and Grandpa's best known traits. For example, if your grandmother is an exceptional seamstress, you could ask, "How did you learn to sew so well? Did you make your own clothes when you were a child?" The "hard" approach, on the other hand, can be part of a multi-generational conversation, allowing for input from kids, parents and grandparents alike. Some of Gustafson's suggested questions include:

In order to start building bonds, it doesn't really matter what the questions are, just that they are asked. After all, as Margaret Mead once said, "Everyone needs to have access both to grandparents and grandchildren in order to be a full human being."

Next Article: When Your Child Refuses to Go to School
We enable strictly necessary cookies to give you the best possible experience on Education.com.Cookie policy