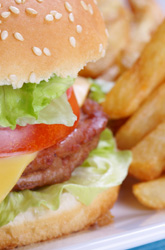 No one ever claimed French fries were good for you, but if your local health department has its way, you won’t be able to claim ignorance is bliss the next time you say, “supersize me.” As of May, all chain restaurants with over 15 outlets are required to post calorie counts on their menus in New York City. A bill winding its way through the California State Legislature would require all chain restaurants with over 15 outlets in the state to post nutritional information including calorie count, the number of carbohydrates and the number of grams of fat on the menu. Advocates assume these regulations will take a bite out of our burgeoning obesity rates, inspiring patrons to demand healthier foods.

The idea, they say, is that restaurant-goers might not be inclined to order that bloomin’ onion if they realize it packs a whopping 2275 calories, more than the average adult needs to eat in one day. And there is some research to back that up. A study in New York City after the law went into effect showed that 12% of Subway customers reported seeing the information and changing their orders accordingly, ordering meals with 99 fewer calories than diners who saw the information but weren’t affected. A recent study by the Dr. Robert C. Atkins and Veronica Atkins Center for Weight and Health at University of California, Berkeley predicted that adult fast-food customers might eat 9300 fewer calories per year if the calorie counts were prominently posted, losing three pounds annually.

How this would affect children is unclear. After all, if adults struggle to resist junk food, the battle for self-control might be even harder for kids, who may not understand the link between nutrition and health. “ Having calorie counts on menus is part of the puzzle, not the main part of healthy eating,” says Susan Adams, Professor of Nutrition at LaSalle University. “The focus should be on total diet, meaning everything that’s consumed over a day or week’s time, and that any food can get into a healthy diet if it’s the right portion and eaten with moderation and combined with regular physical activity.”

And that’s the rub. Today’s skyrocketing rates of obesity result from a combination of factors like a more sedentary lifestyle, larger portions, a reliance on processed foods and more meals eaten out than in previous generations. Kids who eat low-calorie meals at McDonalds and then go home to play Wii for six hours still won’t be healthy. And parents who make fast food meals a regular part of the family diet may not be the adults most concerned with childhood nutrition in the first place. For that matter, there’s nothing to say that diners turned off by the 1450 calories in the Border Grande Taco Salad with Beef at Taco Bell won’t simply drag their kids to the taqueria next door, where calorie counts won’t be required, but the foods may be just as fattening.

The New York State Restaurant Association is currently challenging the New York City law in the courts, and California Bill SB1420 is still in process. Whether calorie counts on menus are a flash in the pan or here to stay, one thing’s certain: if you’re concerned about your child’s nutrition, nothing beats a home-cooked meal.

Download Article
Next Article: Think Outside the Lunch Box! 3 Kid-Friendly School Snacks
We enable strictly necessary cookies to give you the best possible experience on Education.com.Cookie policy