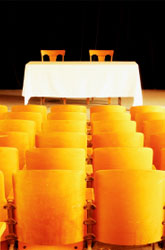 In the eventful pre-election season of debates, rallies, and political posturing, presidential candidates Barack Obama and John McCain have had a lot to say about powerhouse issues such as national security and the economy. However, it was only recently that education, a perennial concern for families the nation over, came to the forefront in a spirited debate between the two candidates’ education policy advisers.

Lisa Graham Keegan, the education adviser to McCain’s campaign, and Linda Darling-Hammond, the education adviser in Obama’s camp, sat down October 21st at Columbia University’s Teachers College for a moderated debate on education and the next president. Among the topics discussed were early childhood education, the No Child Left Behind law, teacher quality, school choice, and the contentious issue of assessments and testing.

Both Keegan and Darling-Hammond were eager to finally highlight their candidate’s views on education, and agreed that the issue has not been emphasized enough throughout the campaign season. “We kind of have to put part of that on us, part of that on the press that’s not following through with it,” said Keegan.

The two women found little common ground over No Child Left Behind, the educational reform measure that places strong emphasis on standards and accountability. “Senator Obama believes in the goals of the law,” such as closing the achievement gap, qualified teachers, and accountability, said Darling-Hammond. “At the same time, he acknowledges that there are many, many problems with the law and how it’s been implemented. They need to be fixed.” Keegan offered a more positive outlook on the measure, stating that McCain is a strong supporter of NCLB and believes that “one of the strongest features of No Child Left Behind is the ability to know how every school is doing” in relationship to one another.

Keegan’s emphasis on standardized assessments as a metric for tracking school and student achievement was challenged by Darling-Hammond, who stated that, “The law needs to be organized around investing in school improvement, in strategic and useful ways rather than simply trying to flog schools into excellence with a set of sanctions and punishments.” She also criticized the current method of standardized assessments, which typically take the form of bubble tests, as being a “1950s conception“ which needs to be redesigned to fit 21st century skill areas such as science and technology.

Keegan and Darling-Hammond also clashed on the issue of early childhood education, which has been a cornerstone of Senator Obama’s education initiatives. “The early childhood research base is really clear that high quality preschool has strong benefits and lasting benefits for students throughout school,” said Darling-Hammond, who emphasized Obama’s goal of increasing the number of students getting access to Head Start by 100,000. In contrast, Keegan voiced skepticism toward the idea that access to preschool results in greater gains later on. “If it were true, and I wish it were, that preschool was resulting in this fabulous effect, then by now we should have a lot more progress in elementary, middle and high school.” Keegan went on to cite the need for teacher quality assessments as an important factor in evaluating the effectiveness of preschool programs.

Another topic to receive attention from both candidates’ advisers was that of school choice, which has played a central part in McCain’s education initiatives. Both advisers found common ground over the idea of expanding charter schools across the country. However, they differed in their perspective on school vouchers, which McCain strongly supports, and which Obama opposes. Keegan said giving parents an option in where to send their kids will lead to better schools and higher achievement.  When parents choose, they "are much more highly satisfied with the schools, feel they are safer, their kids are happier there, and the environment is one they would like for their child," Keegan said. Darling-Hammond said Obama's focus will be on making schools worth choosing, saying that “Choice isn’t worth much if all it does is move around the deck chairs on the Titanic.”

While Obama and McCain themselves may not be talking much about education, their advisers offered a taste of each candidate's views on the major issues affecting America's schools. For voters only two weeks away from marking their ballots, it's about time.