Log in with different email
For more assistance contact customer service
Outside the Classroom
Second Language Acquisition Teaching
Parlez-Vous Français? The Case for the Bilingual Child

Parlez-Vous Français? The Case for the Bilingual Child 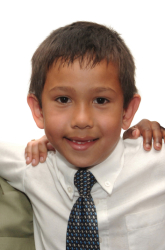 Whether or not you’ve actually seen Dora the Explorer, you’re probably aware that many parents are jumping on the bandwagon of exposing their child to a second language.  Whether it’s Latin, Spanish, Mandarin, or any other language, parents everywhere are insisting that bilingual children have an edge over kids who only speak one language.  And, this isn't some elitest craze, the overwhelming consensus of the experts is that children should really be learning a second language.

“Speaking two languages opens up a whole new world to children,” says Laurie Weaver, Ed.D., Associate Professor of Bilingual and Multicultural Studies at University of Houston-Clear Lake. “Not only will they be better prepared to understand others, they will also understand themselves and their own language better.”

Weaver is one of many parents who believes in the value of their children speaking two languages.  Research has shown that kids who are routinely exposed to a second language from an early age, consistently score higher on English tests as an older child.  Apparently learning a second language not only makes you bilingual, it also increases English proficiency.

This may seem like an easily attainable goal in a family where at least one parent is fluent in another language.  Most families in that boat follow the one-language, one-parent method, where one parent speaks solely Language A, and the other speaks only Language B.  Some bilingual families choose the one-language, one-place method.  This means Spanish, for example, might be spoken at home, while English is used everywhere else.

But is it even possible for a child to become bilingual in a family that only speaks one language?  Can their child ever learn another language?

The answer is yes.  Parents all over the world are seeing the benefit of teaching their child a second language, even when they only speak one language themselves.  But how are they doing it?

Many parents start with the basic: exposing their child to a second language at a very young age.  From videos and music for babies, to toddler Parent and Me language classes at the Y, these children learn a few words and become familiar with the sounds and rhythms of a second language.

Some parents take it one step further and hire a French-speaking nanny, who will only speak French with the children.  Or they find a daycare/preschool where Spanish is the only language spoken.  Second languages can be supplemented at home through children’s books, videos, and TV shows such as Go, Diego, Go or Ni Hao, Kai-lan.

But the most successful bilingual families find that children need more than just the occasional exposure to truly become bilingual.  These families are overwhelmingly seeking out immersion schools in their area.

“Parents who understand the benefits and commit to a bilingual education for their child also understand that one of the best ways to do so is to enroll their child in a language immersion school, especially if the parent does not speak the second language.” says Philippe Dietz, Head of the International School of the Peninsula in Palo Alto, California. “An immersion environment provides enough language acquisition support at school that it should not be a problem if the parents don’t speak the second language at home,”

Immersion schools are popping up all over the country.  In these schools, students study the same subjects as their peers: math, science, art, etc., but they learn it in another language.  Immersion schools can be public, magnet, or private.  They can offer anywhere from 25% language immersion to a complete 100% language immersion.  Spanish, French, and Mandarin seem to be the most common choices, although schools exist in the United States covering more languages than those.  (For more information about immersion schools or to search for one in your area visit: www.cal.org/resources/immersion/.)

Families can also participate together in a language immersion camp for a week or a long weekend.  Concordia Language Villages, for example, offers programs for families all over the country in over 12 different languages. (Check them out at: clvweb.cord.edu/prweb/)

“A bilingual education has many cognitive benefits,” notes Dietz. “It develops the brain differently, stimulating more mental flexibility, creativity and originality of thought. When children are bilingual, they can easily find more than one way to approach a complex dilemma and think ‘outside of the box.’”

It was once assumed that only bilingual parents could have hope that their child would speak two languages.  Today, however, abundant resources surround most families.  With a little help and an adventurous spirit, all our children can have the benefit of speaking a second language.

Next Article: How Children Learn a Second Language
We enable strictly necessary cookies to give you the best possible experience on Education.com.Cookie policy