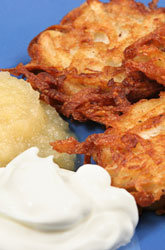 Nothing says Hanukkah like potato latkes. These hash-brown-like pancakes were originally made of cheese. Today, they are made with potato, onion, and can also feature carrot and sage. There are many varieties of latke, but there’s one thing they all have in common: they are fried in oil. And the oil is part of the reason that these treats are enjoyed at Hanukkah. For after the Maccabees defeated the Syrian army, they returned to the Temple of Jerusalem to find it had been turned into a temple to the Greek Gods. They found only one flask of oil, enough to burn a menorah for just one day. But, the oil burned for eight days. This is why Hanukkah is an eight-day holiday called the Festival of Lights, and why oil plays such a big role in the festivities.

Enjoying this Jewish food tradition is simple, as latkes require few ingredients, but they’re also delicious. Here’s a traditional recipe for potato latkes that your family is sure to enjoy this holiday season:

What You Need:
What You Do:
Next Article: How to Keep Kids Engaged at the Passover Seder
We enable strictly necessary cookies to give you the best possible experience on Education.com.Cookie policy