Log in with different email
For more assistance contact customer service
School and Academics
Helping Your Child With Social Studies/History
Meet Martin Luther King: the Man and the Message

Meet Martin Luther King: the Man and the Message 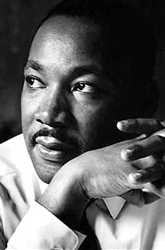 Most kids have off from school for Martin Luther King, Jr. Day, but between sleeping in, catching up on homework and hanging with friends, they may only have a cursory understanding of the man for whom this holiday is named. Take today to celebrate nonviolence, equality, service and justice with your child—ideas that Martin Luther King, Jr. brought to the forefront of our national conscious. Though the complexities of the civil rights movement may be difficult to grasp, every child can understand King's dream that one day, “little black boys and black girls will be able to join hands with the little white boys and white girls as sisters and brothers.” In fact, this generation of children plays an integral role in making King's dream a reality. Kira Duke, education coordinator for the National Civil Rights Museum, and Clayborne Carson, PhD, director of the Martin Luther King, Jr. Research and Education Institute, offers these tips for helping your child appreciate King's dream and her own role in it:

For Preschoolers and Kindergarteners:

Duke says it's best to introduce young children to King as a young boy, rather than launching into the legacy that King left as a man. “The story of the civil rights movement is not something kids of this age can truly comprehend, and simplifying it causes problems,” she says. Instead, Duke says, parents should relate the story of King's first encounter with racism. He had white friends as a young child, but when he grew up his friends' parents told them, “You can't play with Martin, anymore.” Use this as a talking point: How do you think this made Martin feel? How would you feel if you weren't allowed to play with your friends anymore? Carson says this technique helps kids to grasp the concept of racism. “These are graphic instances that kids can relate to. It humanizes the problem of segregation,” he says.

Martin Luther King, Jr. Day is a great way to introduce the concept of service, which lies at the heart of King's message. “Everybody can be great, because anybody can serve,” King said. “You don't have to have a college degree to serve. You don't have to make your subject and verb agree to serve. You only need a heart full of grace. A soul generated by love.” Duke suggests finding volunteer activities to do with your child on this holiday, whether it be running errands for the elderly in the community, dishing out food at a soup kitchen, or picking up trash in your favorite park.

King Day can also be a great way to introduce the topic of justice, says Carson, by asking your child about their definition of fairness. “Most kids at any age will respond if you ask, 'What's fair and unfair? Can you think of something unfair that happened at school and what can you do about it? What happens if something unfair happens to your friend?',” he says. Carson says this dialogue can help kids begin to empathize with King's struggle, in the same way they empathize with some of their favorite characters in books. “History is a story just like a piece of literature,” he says. “And people can engage in a story of people like themselves.”

Carson says kids of this age can start to pick apart some of King's speeches, much as you would a piece of literature. Highlighting parts of King's speeches is a great way to teach about language mechanics, such as metaphor and simile, he says. For example, in the “I've Been to the Mountaintop Speech” of 1968 King said white authorities didn't understand when they turned fire hoses on civil rights protesters that, “There was a certain kind of fire that no water can put out.” Asking your middle schooler, “What would be a kind of fire that no water could put out” is a good way to reflect upon King's oratory technique and upon the strength of the civil rights movement.

Recommended Speech: “I've Been to the Mountaintop,” 1968

At this age, kids can start to broaden their understanding of King's philosophy; it wasn't just about the rights of African Americans, but about anyone's rights to civil disobedience in the face of oppression. Duke says this idea, that anyone can make a commitment to nonviolent protest in face of difficulty, is a powerful message that rings true for high schoolers.

Carson says teens today should know that many peaceful protests during civil rights movements, such as the desegregation of Central High School in Little Rock, Arkansas, were lead by teenagers themselves. Getting involved in the fight for social justice is one of the best ways to honor King, says Carson. The good news is: “There are probably more social justice groups around today then there were then,” he says.

Recommended Speech: “Beyond Vietnam: A Time to Break Silence”, 1967

Even though today is a special day marked out to celebrate King, Carson says parents should consider honoring King at other points during the year, through discussion, reading, or better yet, action through community service. “Do something in September and plant the seed so that when January comes around next year there's an awareness already there,” he says.

Next Article: Celebrate Martin Luther King Day!
We enable strictly necessary cookies to give you the best possible experience on Education.com.Cookie policy