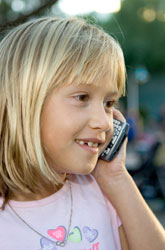 We see them daily—pedestrians carrying on cell phone conversations as they cross the street. And with cell phone use on the rise, more and more children are chatting on the phone as they walk to and from school and around the neighborhood. Walking and talking—it's the latest trend, and experts warn that it could present a danger to kids.

How does cell phone use affect child pedestrian risk? Researchers at the University of Alabama at Birmingham recently determined that the increase in risk is significant. UAB doctoral candidate Despina Stavrinos and UAB professor Dr. David Schwebel released the first study of its kind last month, examining the risks associated with children talking on the phone as they cross the street.

The study focused on children ages 10 and 11. “Most children are safe pedestrians by age 10,” says Schwebel. “At that point, if they are undistracted they are typically going to be safe.”

Supported by the UAB Injury Control Research Center, Stavrinos worked under the direction of Schwebel to create a virtual reality environment that replicates real-world street-crossing behaviors. Three screens displayed a crosswalk with simulated vehicles traveling on the virtual street.

The study found a 20 percent larger delay in entering the traffic gap. According to Schwebel, there are several necessary steps in attending to traffic as a pedestrian. You need to judge when there’s a safe gap to step in, and then you need to initiate the step. “One of the things we find with younger children is that they don’t anticipate a safe gap in traffic,” Schwebel says. “They’re delayed in entering it, and we found that the delay was even more substantial when they were on the phone, which puts them at risk.”

The most alarming numbers were in collisions, Schwebel says. While talking on the phone in the virtual environment, the children were 43 percent more likely to be hit by a vehicle or have a close call. The study also found that children with cell phones looked both ways before crossing the street 19 percent fewer times.

“The bigger goal in research is to disseminate the findings,” Stavrinos says. “We want to make sure that we’re not suggesting that parents don’t buy cell phones for their kids. The study really highlights the importance, though, of putting the cell phone down when you approach an intersection—devoting attention to process the information.”

“I see cell phones as primarily a good thing,” Schwebel says. “The message here is that children think about when they’re using the phone. Children need to be taught to finish their phone calls before they cross the street.”

The key is to not walk and talk. Perhaps this should be the first rule parents explain to their children when giving the gift of a cell phone. Additional tips (compiled from Safe Kids USA, the National Highway Traffic Safety Administration, and the U.S. Department of Transportation) for teaching children pedestrian safety rules include: