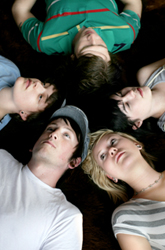 "Increasing numbers of parents say their teens want to attend coed teen slumber parties," says Dr. Linda Sonna, psychologist and author of 10 parenting books, including The Everything Parenting a Teenager Book. For many parents, there's no discussion about it –coed sleepovers are out of the question. For other parents whose teens who are hosting and attending these boy-girl events, it's merely a sign of the times, a natural extension of the ever-expanding platonic relationships between the sexes.

Dr. Sonna agrees that many teenagers have "deep, platonic friendships with members of the opposite sex." She also believes the assertion that kids just want to be able to hang out with their friends, all night long –the typical argument for having such a party –is apt to be true. But she warns that coed slumber parties often include a lot of sexual activity. In most cases, having sex isn't planned; it's a reaction to attraction, peer pressure and opportunity.

It's this combination of "raging hormones and poor executive judgment" that led Melinda Reilly to say no when her teenage daughter was invited to a coed sleepover. Reilly, whose blog Parents Headsup encourages parents to make informed decisions about their children's safety, viewed the sleepover "to be an unnecessary risk.”

Most importantly, talk to your teen. “It's hard to go against the group," Reilly says. It's possible your teen doesn't want to go, but needs you to be the fall guy. But, if she does want to attend and you're uncomfortable, don't give in –no matter how much she pouts and cajoles. "Consider," points out Dr. Sonna, "that if you can’t hold firm when your child pressures you, you cannot expect your teen to say 'no' when pressured by peers."

Next Article: Talking to Your Boy About Sex
We enable strictly necessary cookies to give you the best possible experience on Education.com.Cookie policy