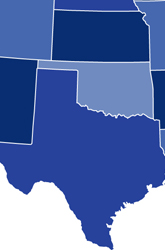 Did you know that where you live could determine your child's well-being?

According to a new report by the nonprofit, nonpartisan organization Every Child Matters Education Fund (ECMEF), where in the United States a child is born and raised can determine his chances of living to adulthood, as well as his quality of life throughout childhood. The report, called “Geography Matters: Child Well-Being in the States,” compared all 50 states based on several well-being standards, including lack of access to prenatal care, premature deaths, malnutrition, poverty, child abuse, teen birth and teen incarceration.

How the nation arrived at this point is a complex issue, but what it mostly boils down to is access to services, says Michael Petit, the author of the report and founder of ECMEF. “The differences between states speak to a wide variety in supports and interventions,” he says.

And it's the delivery of those services that makes this such a politically heated issue. It's no coincidence that the states offering fewer services have a much higher population of minority children, according to T. Berry Brazelton, Ph.D., founder of Brazelton Touchpoints Center and clinical professor of pediatrics emeritus at Harvard Medical School. “Minorities and the poor are considered throw aways,” he says, arguing that our society tends to “pay attention to what's going on in the middle class.”

The depth and breadth of services offered has to do with the political culture that exists in the state, too. “The bottom states generally have a narrower view of the role of government in addressing social issues,” the report states, asking, “Are states unable to invest in children because they are too poor? Or are they poor because they fail to invest?” But, it's not just the states' fault, the report suggests: the disparities are also brought on by weak federal policies and declining federal investments in this area.

Petit acknowledges that some families do not reach out to, or are simply unaware of, the services provided to them. Case in point: every single child in the state of Vermont is insured, and that goes side by side with data that suggests Vermonters are much more likely to take advantage of Medicaid.

Regardless of the reasons, Brazelton says we need to find a way to get these services where they're needed, and quick. “We need to start with families early, and support them at each stage of their child's development,” he says. “By age 3 we can promise that these kids will have self-esteem, they'll feel like they matter, and when that happens they'll learn anything we want them to.”

Beyond the moral implications, the report argues that there are many reasons why these results should be seen as a wake-up call to all Americans, rich and poor, insured and uninsured, Vermonter and Louisianan alike. “Global competitiveness, erasing historical inequalities, and better care for an aging population will be the principal benefits from closing the gap,” the report says.

What can be done about it? The report concludes that closing the disparities among the states is achievable, but it's going to take a lot more than what volunteers alone can provide. It's going to take targeted investment strategies and the collaboration of state and federal lawmakers. “The pie is not big enough to address the needs of children,” Petit says, citing the exorbitant military budget that tax-payers fund each year.

But, says Petit, the first step, and the impetus behind this report, is to make Americans acutely aware of the sad fact that in this country, your chances at life and your zip code could go hand in hand.

To see how your state ranks, go to www.everychildmatters.org.

Next Article: Factoring in the Achievement Gap
We enable strictly necessary cookies to give you the best possible experience on Education.com.Cookie policy