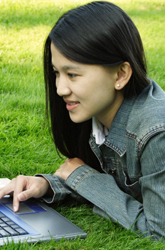 College applications are stressful, and perhaps the most daunting aspect of the process is the dreaded “personal statement.” What with trying to be yourself and trying to be what college admissions officers want you to be, high school seniors often find themselves staring at a blank page for hours, days, and maybe even weeks hoping for inspiration to strike.However, although deciding who they want to be on paper can be difficult, it can also be extremely rewarding, and maybe even a little bit fun!

“We're trying to get insight about who the student is as a person,” says Oberlin College Admissions Officer Leslie Braat, “and the essay is an opportunity to learn about what's important to the student, what makes them tick, in addition to their writing skills.” For your teen to get her personality on paper, it's important she really think about who she is, what she loves, and why she wants this so badly in the first place.

So, what should teens be thinking as they stare at that blank page? Here are some hints:

In the end, it's up to your teen to write the essay that will best represent her (without boring her reader to death). “You can't tell what makes a good essay until you read it,” says Braat. But the fact that every great college essay is different shouldn't scare her – it should give her confidence. Growing up is all about becoming an individual, and now is the time to shine in all your uniqueness, whether in the eyes of parents, peers, or prospective colleges.

Next Article: Perfect SAT? Make More Out of Your High Score
We enable strictly necessary cookies to give you the best possible experience on Education.com.Cookie policy