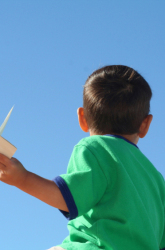 Over the last 15 years, autism has gone from being a little known condition, to a disorder of epidemic proportions. The Centers for Disease Control say that out of every 150 kids born in the U.S., one will have some form of autism. Autism is typically described as an impairment in social interaction, and is one disorder in a collection of developmental disabilities known as Autism Spectrum Disorders (ASD).

The reasons behind the increase in ASD are complex. Some experts say it's because our definition of autism has expanded—with children falling along a wide spectrum of autism, from "highly functioning" to "nonverbal." Other experts say that there could be environmental factors triggering a rise in autism. Still others point to a heightened awareness of the disorder, which has more parents paying attention to the symptoms.

That's what happened to Wendy Means of Columbus, Ohio, who started to notice that there was something different about how her 18-month-old son, Robert, was developing in comparison to his twin sister.

Means, a former elementary school teacher, says her first red flag was her son's speech delay—one of the main factors in diagnosing autism. “We said, 'Okay, so the babbling isn't happening',” she says. Then, Means and her husband started to notice another major symptom of autism—difficulty with social interaction. “He wasn't making eye contact and he wasn't really responding when grown-ups called his name,” Means says. Repetitive motion is another symptom of autism that Robert displayed. “He did repetitive motions with his toys. He was not a typical child moving from one toy to the next, and there was something going on with his processing” she says.

When Robert was 2 1/2, the pediatrician referred him to be assessed for his speech delays. It was during this assessment with an early intervention specialist that the word “autism” surfaced. “We were terrified as to what this meant. The only Autism cases I have known about is like Rainman, or the most extreme cases,” she says.

But diagnosing autism is tricky because it manifests itself so differently in every child. “Unfortunately, there's no blood test,” says Scott Rowson, Senior Information Specialist at the Thompson Center for Autism and Neurological Disorders at the University of Missouri-Columbia. Instead, he says, it takes a series of evaluations, observations and parent interviews “by individuals who are highly trained and who have worked with autistic kids for a number of years.”

After taking Robert to two different autism centers for evaluation, the Means family received a more precise diagnosis: no, Robert was not autistic - he had a combination of Sensory Processing Disorder (where the brain doesn't get the right messages), Apraxia (a speech disorder) and Hypotonia (low muscle tone). What was most confusing, Means says, was that these three things are what autistic children have, but a child can have these things and still not be technically autistic. “That was really difficult to understand as a parent,” she says. However, Means says it was a relief to finally have a concrete diagnosis, which empowered her to find out everything she could about her son's condition. She read books, she researched online, she even changed to a dairy-free, gluten-free and wheat-free diet. “I just kept going through the checklist, asking myself, 'Have I done everything I can to help him turn the corner even more?'.”

Means says she got to a point where she was educating her pediatrician about Sensory Processing Disorder, Apraxia and Hypotonia. The fact is that some pediatricians know more about ASD than others, says Fiona Miller, psychologist at the University of Michigan Autism and Communication Disorders Center, and that's why her center often refers parents to pediatricians with better knowledge of these specific disorders. Miller recommends that parents also stay in the know by becoming familiar with the three main symptoms of ASD (speech problems, repetitive motions or obsessive behaviors, and difficulty with reciprocal social interaction.) If your child does display some of these symptoms, Miller recommends that parents bring it up to their pediatrician and get an appointment at an autism center. “A center can track issues over time, and more information is always better,” Miller says. “The real risk is not catching something early.”

Means says she learned first-hand the importance of early intervention—Robert, who is 4 now, has made incredible gains. He has received speech and occupational therapy, and participates in a swimming program. He also attends a special needs preschool, which Means says gave him the structure and extra assistance he needed.

Means says her family's goal is to enroll him in a regular kindergarten next year, without the help of a special needs program. Robert is closing in on that goal, prompting Means to say that if parents know one thing only about ASD, it should be this: “full recovery is possible through early intervention.”

Next Article: The Definition of Autism: About to Change?
We enable strictly necessary cookies to give you the best possible experience on Education.com.Cookie policy