What to Do When Your Child Starts Swearing 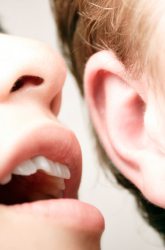 You’ve seen the commercial where the pretty blond woman holds up her pack of gum and asks, “dirty mouth?”  She’s of course referring to white teeth and fresh breath. But many parents can relate to living with dirty mouths every day –that is, bad words pouring out from a child’s lips.

There comes a time in every kid’s life when he experiments (at least you hope it’s just an experiment!) with bad language. The key is to nip it early before a habit is formed. Why do kids swear? The reasons are varied: to get attention, impress others at school, or often an effort to exert their own choices. Knowing how to handle it before it happens can really help. Be prepared, as the motto goes. And know that this, too, shall pass –if it’s handled correctly.

First, set an example at home. Quite simply, avoid swearing yourself, even if your husband really makes you angry or someone cuts you off in the car. Remember, there are little sponges in the backseat, absorbing everything. If you take the swear words out of your vocabulary, it will decrease the chances of your child repeating them.

When kids are young, they still want to be just like you, so keep it clean! According to Nancy Brown, Ph.D. and Senior Research Associate at the Palo Alto Medical Foundation Research Institute, “Chances are good that young children (under five) are just mimicking and do not understand the meaning of the words. This is a wake-up call to parents, who may have a swearing habit that needs to change, or are letting their children watch TV/movies that are inappropriate.”

If you slip up and swear, (and let’s face it, we all have to release a little steam every once in awhile), try exclaiming another catchy word in its place like “yabba dabba do!’ to take the attention away from the bad word. Or try rhyming it, like “shoot, boot, toot!” For older kids, a little more communication is in order. Explain why you burst out and why it was wrong. You can say, “I shouldn’t have lost my temper and used that word. It was disrespectful.”

Second, set the rules. If they swear, they get punished. It’s as simple as that. You may not be able to control what they say outside of your home, but at least while they are with you they know the rules.  And be sure to tell them why it isn’t permitted.

As Brown says, “For kids five to ten, tell them why the words are unacceptable and tell them clearly you will not allow their use.  Have a consequence for their use and that should reduce the swearing. If not, then there may be a feeling and emotion behind the swearing and the child needs to learn how to express them in a way people can listen and respond.”

Third, give your child an alternative. If he wants to release his frustration and anger verbally (which can sometimes be better than releasing it physically on his brother) give him some words that are acceptable in your house. Have him say “crumpet!” or “cheese!” when he’s mad. If it’s an older kid, he may not be as willing to substitute funny food for swear words. Try to identify why he has such strong emotions and encourage him to express them in a more socially constructive way, by encouraging him to try to express and explain how he's feeling, rather than exclaim about it.

Most important, communicate with your child, especially if the swearing seems a symptom of a deeper, underlying problem. Usually, swearing is a ploy for attention and it passes as kids move on to bigger and better things. It will be goodbye dirty mouth, with thankfully no soap washing required.