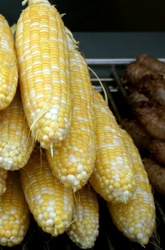 Summer is festival season – the time of year that small towns celebrate the ripest produce, regional cooking, and traditional hospitality. It’s Americana at its finest, and a chance to introduce kids to the quirky pleasures they won’t find in chain restaurants and corporate amusement parks. Here is a sampling guaranteed to get your mouth watering:

If you only visit one cook-off this summer, this should probably be it. It’s not only “the biggest event in Polk County” – it’s also considered one of the top ten barbeque cook-offs in the world. In addition to meat cooked “low and slow,” you’ll find bingo, live music, and fun parks.

This festival in “Peach County” is home not only to the world’s largest peach cobbler, but also to a train, water slides, free concerts, tours of a local packing company, and the “painting of the peaches.”

The Taste of Chicago is more of a straight pig-out than an all-around festival. Since most kids don’t have the patience to sit through a meal at Charlie Trotter’s, this is a great opportunity to sample food from local restaurants – vendors include everyone from local pizzerias to five star restaurants.

You’ll know you’re there before you reach the parking lot – the smell of everything from garlic ice cream to garlic pizza is that strong. The children’s area features art projects and entertainment, rock climbing, and live music.

Celebrate the king of crustaceans with a carnival, live music, a parade, a kids’ one mile fun run, all-you-can-eat pancake breakfasts, and, of course, lotsa “lobstah.”

If the prospect of unlimited blueberry confections doesn’t tempt them, the chalk art sessions, pie-eating contests, magic show, sand sculpting event and parade should do the trick.

Looking for a little Cajun flavor? You’ll find it here, with all day “fais-do-do’s,” the crowning of the “Little Shrimp Queen,” the blessing of the shrimp boats, carnival rides, and of course, shrimp, shrimp, shrimp – boiled, fried, in sauce piquante….

It doesn’t get any more regional than this: southern fried catfish with hush puppies and grits, boiled peanuts, and a parade starring Cecil the Catfish. Of course, you’ll also find more generic attractions like an antique car show, pony rides, a truck and tractor exhibit, a parade and live music.

Can’t make the festival, but still want your kids to know what real food’s all about? Check out Roadfood: The Coast-to-Coast Guide to 700 of the Best Barbecue Joints, Lobster Shacks, Ice Cream Parlors, Highway Diners, and Much, Much More by Jane and Michael Stern.

Next Article: Throw a Homemade Carnival!
We enable strictly necessary cookies to give you the best possible experience on Education.com.Cookie policy