1 out of 4 Teenagers Binge Drink 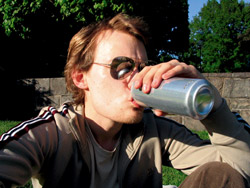 The official drinking age in America is 21, but a good chunk of teenagers are still drinking. According to a study published in the January 2007 issue of Pediatrics magazine, almost half of 15,214 teenagers surveyed admitted to having had alcohol in the past month. And 64% of those who drank said they'd had five or more drinks in a row.

The study, conducted by the Centers for Disease Control and Prevention (CDC), showed that teens aren't taking alcohol all that seriously. One out of three teens got in a car with someone who'd been drinking. And one out of 10 drove after drinking themselves. That is worrying in and of itself. But driving aside, high school students who binge drink are five times more likely to be sexually active than their non-drinking peers, 18 times more likely to smoke, and four times more likely to get into a fist fight. They also do worse in school and are more likely to attempt suicide.

"Contrary to popular belief, parents remain the greatest influence over their children's behavior," says Richard Gallagher, PhD, director of the Parenting Institute and the Thriving Teens Project at the NYU Child Study Center. To be sure, peer pressure, a lack of self-confidence, and many other factors contribute to teen drinking. But parents can help their kids fight the inclination, Gallagher says. He offers these tips:

Next Article: How to Talk to Your Teen About Drinking
We enable strictly necessary cookies to give you the best possible experience on Education.com.Cookie policy