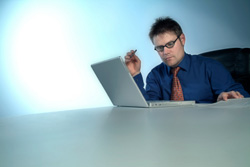 It's hard to find time for family time. But a new study, conducted by independent research firm Kelton Research for support.com, found that three out of five Americans spend more time at the computer keyboard than they do with their significant other.

With a computer, there's no nagging to clean the kitchen, take out the garbage, or flip down the toilet seat. There's no sleeping on the couch. Still, like any relationship, it's not always smooth sailing. When describing their most recent computer problem, the majority of Americans (52%) said the experience filled them with "anger," "sadness," or "alienation."

Sound familiar? Experts say that technology can sometimes cause significant emotional distress, similar to what happens when a problem occurs between spouses. And the bad news is that our dependence on computers is growing – of over 1,000 people polled in Kelton Research's "Cyber Stress" study, 84% said that they are more dependent on their home computer now than they were just three years ago. The good news? Unlike marriage, if your computer is making you cry, it needn't be 'til death do you part... Just dump that turkey.

Next Article: Partnership Parenting: Why and How it Strengthens Families
We enable strictly necessary cookies to give you the best possible experience on Education.com.Cookie policy