Log in with different email
For more assistance contact customer service
Learning and Your Child
Autism Spectrum Disorders
Is Autism on the Rise?

Is Autism on the Rise? 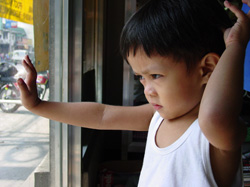 Most parents can’t help but fuss over a new baby. They coo to their child, play peek-a-boo with the bath towel, and gaze into those little eyes in wonder, whether or not they get any response. But studies show that response matters.

If a young child doesn’t smile or chatter back at you, it may be more than personality at play. It may be a sign of autism.

“Today, one in 166 individuals is diagnosed with autism, making it more common than pediatric cancer, diabetes, and AIDS combined,” according to the nonprofit organization, Autism Speaks. Just to put things in perspective, that’s a new case diagnosed almost every 20 minutes. The numbers are staggering, and they’re increasing at an alarming rate – 10-17% per year in the U.S. alone. In fact, autism is the fastest-growing disability in America.

Just why it’s growing so fast is anybody’s guess. A study by the University of Pennsylvania School of Medicine recently reported a link between autism and free radicals. A report from Cornell University blamed early exposure to TV. Another study, by New Scientist magazine, pointed to age as a determining factor. According to the report, men over 40 were almost six times more likely to father a child with autism than younger dads. Toxins, heavy metals, pesticides, flame retardants – everybody has a different brainstorm about why the disability is on the rise. But nobody knows.

The good news: “autism is treatable,” according to the Autism Research Institute. It’s a spectrum disorder, which means it affects different people in different ways. But parents have seen improvement from a variety of treatments – from changes in diet to pharmaceutical drugs. The earlier the diagnosis, the better the outcome.

And there lies the problem. According to the nonprofit organization First Signs, more than 70 percent of children in need of intervention are not identified by their primary care physician.

A lot of that has to do with awareness. This summer, the U.S. Senate unanimously passed the Combating Autism Act of 2006, which will drastically increase National Institute of Health funds devoted to autism education and make sure that all children are screened by the age of two. But for political reasons, the bill sits frozen, unable to make it to the House floor. Click on the link below to find out how you can help. Because sadly, with almost 70 new cases of autism diagnosed per day, this disability is sure to touch someone you know.

Next Article: Assessing Autism Spectrum Disorders: Guidelines for Parents and Educators
We enable strictly necessary cookies to give you the best possible experience on Education.com.Cookie policy