Before Harry Potter: 3 Great Books Your Kids Don't Know Yet 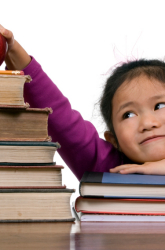 For a long while, Anita Silvey had a recurring dream. She was preparing to set off on a treacherous ocean crossing, on a ship with a swarm of families, many with young children. Her trunk could hold only 100 books. In Gilligan's Island fashion, the trip ran amok; she and her fellow passengers washed up on a deserted island. Trunk soggy but still intact, she held her breath. True, there were plenty of coconuts. But had she packed her trunk well enough to ensure the children would get the other nourishment they needed? In short, had she packed the right books?

Sure it's dramatic, but a good book is more than the sum of its pages. According to Silvey, "Reading books to and with children is the single most important thing a parent can do for them."

She should know. Silvey spent over 35 years in the publishing industry as a children's book editor and writer, and at the helm of The Horn Book Magazine, the review journal often dubbed "the bible of children's books." She estimates that she's read over 135,000 titles. With her book, 100 Best Books for Children, she was forced to winnow down her mental list of a few thousand favorites to just 100.

In writing the book, Silvey envisioned not just a list of what parents should buy, but an insider's look at the stories behind the stories. For example, many people know the classic Make Way for Ducklings, but few are aware that author Robert McCloskey kept a clan of ducks in his Greenwich Village bathtub to ward off writer's block. Or that Theodor Geisel (more commonly known by his pen name, Dr. Seuss) was rejected by 27 publishers for being "too different" before publisher William Spaulding gave him a list of 220 words perfectly geared for 1st graders, and Seuss "decided that the first two rhyming words that he located would make up the title." They were "cat" and "hat."

"We go behind the scenes of movies all the time," Silvey says. "But people don't often get a backstage tour with children's books."

Before settling on her magic hundred, Silvey interviewed dozens of editors, publishers, and authors. In fact, she interviewed everyone she met – friends, family, her dentist, even her cab driver. The thing that surprised her the most, Silvey says, is that more often than not "they didn't remember the details of the plot or story, or character. But they remembered that their mother, or their teacher, or their grandmother had read it to them. Talking about that favorite book 10, 20, even 30 years later, their eyes would light up. A door to a room from their past that was so wonderful for them opened up again."

Making those memories for your kids doesn't have to take a long time. "So much of it is just literally taking a few minutes out of the day to share something simple with children, but to be enthusiastic about what you share," she says.

Here are three perfect candidates for the job – classics published in the 40s and 50s – that are as wonderful today as they were then. If they're not already on your child's shelf, they should be.

Why she likes it: "The British critic John Rowe Townsend considers this the greatest British novel written since World War II. But of the 100 Best Books for Children, this is the one book that the most people are unfamiliar with. This is a great read-aloud family book. And for adults, it remains one of those rare children's books that can be read in every decade of life with a deeper understanding and appreciation."

Why she likes it: "This is a book typical of the 1940s. It's obviously old fashioned, and yet the theme of bullying, of being an outsider in class, and of children's ultimate responsibility to one another, is timeless. Encountering this book again took my breath away. It could have been written in 2007. That's because Estes stayed true to the essence of childhood. Fashion changes, but those things that are inherent to childhood don't change."

Why she likes it: "In this fanciful book, 9-year-old Elmer Elevator travels to distant Wild Island to free a baby dragon enslaved by wild animals. This is one of the books that I tell parents not to miss, that they often have missed in their child's younger years. It's just magic with a child in this age group. And you could read it easily to a kindergartener, because it's a series of adventures."

Next Article: Great Books to Kick Off the Olympics!
We enable strictly necessary cookies to give you the best possible experience on Education.com.Cookie policy