Log in with different email
For more assistance contact customer service
Learning and Your Child
Autism Spectrum Disorders Theories of Cause
Can Diet Affect Autism? 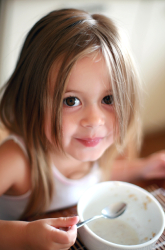 Which would your preschooler prefer for breakfast? Blueberry pancakes with syrup and a glass of cold milk or cooked brown rice served with a milk substitute and sweetener? The answer may seem obvious, but for parents of autistic children, the decision behind what to serve is a tough one. That’s because some parents are choosing a naturopathic approach to autism: a gluten-free, casein-free diet (GFCF).

The GFCF diet is not an easy route by any stretch. Unlike a diet program such as the Atkins diet, which restricts certain foods (vegetables and fruit) and advocates others (meat, cheese), the GFCF diet’s theory is based on the elimination of all foods that contain the proteins gluten (found in wheat, oats, barley, and rye) and casein (found in milk). There is evidence that shows many autistic people are unable to completely digest foods with these proteins in them. And gluten and casein are pervasive, so there’s a huge range of foods to avoid. Sound like a lot of work? It is.

Jenny*, mother of a 10-year-old autistic boy, was willing to roll up her sleeves and do that work. She believes the diet has transformed her son from severely autistic (his diagnosis at 3 years old) to functioning. He had lost all speech and communication skills during development, she explains. “Six months after going on the diet 100 percent, he went from no speech, through echolalia (the repetition of words or phrases just spoken by others), then spontaneous speech,” she says. Her son’s favorite meal is French toast made with eggs and water, bread made from rice flour, Pam spray, pure maple syrup, breakfast sausages, and dairy-free milk. And that’s just breakfast. But, Jenny tells parents: “If there's a chance of getting your child back, isn't that worth it?"

Naturopaths and nutritionists have been saying for years that autism may have something to do with environment, in addition to genes – and that's why what kids eat may play a part. But while altering an autistic child’s diet has worked for some families, to date the GFCF diet has only anecdotal evidence, like the story above, to support it.

Before you get too excited by the possibility that eliminating oatmeal might transform your child, beware. What you substitute is as important as what you eliminate. “Many people have done well with GFCF diets, but in some cases it doesn’t work,” says Kaayla Daniel, Ph.D., Certified Clinical Nutritionist and author of the book The Whole Soy Story: The Dark Side of America’s Favorite Health Food. The main problem, says Daniel, is that children don’t reap all the benefits of the gluten-free, casein-free diet because parents replace gluten and casein with soy, which is very hard on the autistic child’s already sensitive digestive system.

What should they eat instead? Well, first, instead of replacing one food with another, go back to the basics, Daniel says. She suggests parents make homemade soup (chicken, lamb, or beef), using only the bones, water, a little vinegar, and whatever gluten-free, casein-free spices they’d like. Unlike foods that act merely as safer replacements for more problematic ones, the soup takes things one step further, aiming for the root of the problem. According to Daniel, the vinegar pulls out gelatin, cartilage, and minerals from the bones, which can help heal the child’s digestive track.

Kathleen McKenna, M.D., director of the Psychosis and Special Diagnostic Program at Children’s Memorial Hospital in Chicago, says that the most important thing parents can do for their autistic child with regard to nutrition is to provide a well-balanced diet. She recommends parents enlist a nutritionist to get the child on the right track. But McKenna warns, “It can be harmful if the parents focus only on diet and not speech and language, and other areas the child needs to develop.” Diet is just one piece of the puzzle, when it comes to autistic children.

So can a change in diet work? It depends on who you ask. Concrete evidence doesn’t exist, but anecdotal evidence abounds. And whether parents attempt the GFCF diet, or a diet based on a nutritionist’s recommendations, most experts agree that there is something to the theory that food combinations and/or eliminations can have an impact on an autistic child’s behavior. So put away the milk. Lay off the wheat. While there’s no proof-positive, it just might make a difference.

Next Article: Diagnosing Autism: One Family's Story
We enable strictly necessary cookies to give you the best possible experience on Education.com.Cookie policy