Can Eating Fish Harm Your Family? 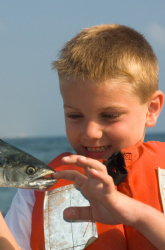 There’s a lot of conflicting information floating around about fish. On the one hand, we’re told it has major nutritional benefits, like Omega-3 fatty acids. On the other, we’re told to avoid it, based on worries about mercury and other contaminants. A report by the Institute of Medicine aims to attack the mumbo jumbo head-on.

According to the report, many of the high-flying claims for health benefits as wide-ranging as protection against Alzheimer’s and diabetes, stand on weak or insufficient factual ground. That’s not to say fish doesn’t have any benefits. It does reduce the risk of heart attacks and contribute to better vision and cognitive development in infants, the scientists found. But fish is also a major source of contaminants like methyl mercury, dioxin, and PCB pollutants, many of which accumulate in the muscles.

Children Up to 12 Years Old and Pregnant Women

Next Article: Smart Kids More Likely to Become Vegetarians?
We enable strictly necessary cookies to give you the best possible experience on Education.com.Cookie policy