Rapping Teacher Gets Through to Kids 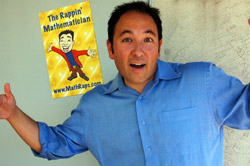 Collect This Article
3.6 based on 7 ratings
by Education.com

Rap to the Rescue!

When Alex Kajitani started teaching math in a low-income middle school in San Diego, he could barely get his students to sit still, let alone listen to him. They told him math was "too boring," "too complicated," "too hard to remember." Frustrated with his inability to get them motivated, Kajitani decided drastic measures were needed. So he donned a pair of sunglasses, pulled out his disco ball, and started rapping.

"My students told me they couldn't remember math concepts, but I noticed that when a new rap song came out on the radio on Monday, by Tuesday they knew all the words by heart," Kajitani says. At first, his students were dumbstruck by his attempts to transform himself into a mathematical Eminem. "Their mouths were hanging open in disbelief and they laughed at me," Kajitani says. "I thought, 'I'm finished.' But when I went by the lunch tables, I heard them singing the songs back to their friends. I thought to myself, a good teacher will do whatever it takes to get their kids to learn. So I put myself out there. I kept at it."

A few days into his new experiment, he passed out his weekly pop quiz. His student's test scores shot through the roof. The raps, in addition to making math class more fun, clearly had an affect on retention. Improper fractions weren't as intimidating armed with the rap "If it's bigger on the topper, it must be improper," and even the statewide achievement test grew less stressful when his school screened a video of his song "Test Time" to ease everybody's nerves. Soon Kajitani's school, one of the poorest in San Diego, started matching and even outperforming the rest of the district on standardized tests. The whole school began singing his songs in the hall, chanting, "What time is it? It's test time!" every time he passed down the corridor.

"I wanted to make math seem a little sexier," Kajitani says. "Kids think rap is so cool that whatever you rap about instantly becomes cool." Especially, he says, when you pair it with authentic backbeats. Here's his take on the decimal system:

"Now what in the world is that itty bitty dot? Yo, I just can't remember and it's making me distraught. I saw it in the price of the item I just bought. It's the de-ci-mal point. Yeah, now you're getting hot."

Rap is cool, there's no doubt about it, but according to a study by Emory University's Rollins School of Public Health, teens who regularly watch "gangsta" rap videos are three times more likely to hit a teacher, twice as likely to have multiple sex partners, and over 2.5 times as likely to get arrested than teens who do not watch those videos. As a rap fan himself, Kajitani liked the idea of creating rap with a positive spin. "It's so nice to get kids rapping about something that's not about violence," he says. In addition to singing about critical math concepts like fractions and quotients, Kajitani sings about how to live a positive life and how to think critically about messages from the media. "I tell them to ignore the images they see on TV and the lyrics they hear on the radio. I don't want them listening to those negative stereotypes."

This is Kajitani's fourth year as a teacher. He came to education after a stint as a restaurant manager. And while an international tour isn't in his immediate future, he's bringing down the house at schools across California. With 40% of Americans admitting that they hated math at school, according to a recent Associated Press news poll, we say pull out the disco ball, Mista K. Keep bustin' those rhymes!

Next Article: What Does It Mean to Do Mathematics?
We enable strictly necessary cookies to give you the best possible experience on Education.com.Cookie policy