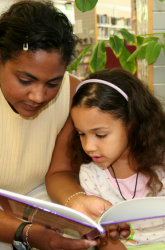 Collect This Article
If you’ve got a young child, you’ve probably seen it already: the pressure’s on to read early. Maybe you’ve heard other parents choosing “academic” preschools or debating different “leveled reader” sets. Nowadays, you might even catch a kid or two reading chapter books by the end of kindergarten.
If you’re thinking, “Wait a minute!” you are not alone: many reading experts share your concerns. “Where are we going in such a hurry?” says Joanne Rossi, Ed.D., reading specialist and Dean of the School of Education at Notre Dame de Namur University.   In more than thirty years of research and practice, she has arrived at one simple conclusion: kids will learn to read when they are ready, and not before.
It’s natural to want your child to keep up with his peers, but looks can be deceiving. According to Rossi, some other students may appear to succeed early, but they may only be “word callers,” who lack the full range of social, emotional, and cognitive skills they need in order to comprehend and enjoy what they read. And early readers can expect no guaranteed long-term edge: by third grade, other students have generally caught up.
All too often, she explains, kids are not ready for independent reading by the age of four or five, and pushing them can have long reaching effects. In some cases, they will stall out early, “failing,” as Rossi says, “before they have a chance to succeed.” Specific reading deficits can be addressed later, she adds, but the poor self-esteem which results from early failure is “a problem that can take years to solve.”
Faced with such dire possibilities, what should parents do? Rossi, like many researchers, recommends a focus not on skills but on a love of reading and books. Read aloud, she urges. Savor pictures, and point to what's known as “environmental print”, such as road signs or food labels. Talk, talk, talk about all of it, and stay relaxed. When a child starts to ask about words, to “read” using pictures and sight words, and to recognize letter-sounds, then he or she has begun a solid, natural path to reading.
For many children this journey begins around age five, and it's truly joyful. But if it happens at six instead, or even seven, experts urge that you respect that slower pace. As David Elkind, Ph.D., Tufts professor and author of the renowned book The Hurried Child, argues, “I think Frederick Froebel, the inventor of the kindergarten, said it best… ‘Children need to learn the language of things before they learn the language of words.’” In other words, when it comes to bookworms, there's plenty of room for “late” birds too.
For some great kindergarten activities that lay the groundwork for reading readiness, click here.  Or, for preschoolers, try these pre-reading activities.
Next Article: Top Ten Backpack Essentials
We enable strictly necessary cookies to give you the best possible experience on Education.com.Cookie policy