Log in with different email
For more assistance contact customer service
School and Academics
Math and Types of Instruction
The End of Fuzzy Math?

The End of Fuzzy Math? 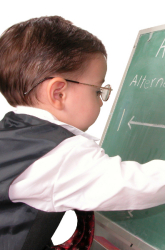 American students do many things well. But for the past decade or so, math has not been one of them. Every few years, the International Association for the Evaluation of Educational Achievement tests kids from a plethora of countries, to see how they stack up against each other in math and science. They publish their results. And recently, as far as math goes, the results have not been good.

The sad truth is, students from the United States perform worse in math than students from most other first-world nations. And they trail far behind test takers in places like Singapore, Taiwan, and Japan. Many fingers have been pointed, and at a variety of culprits. But the fingers have been starting to swing in a common direction, and the culprit, parents across the nation have decided, is “fuzzy math.”

The National Council of Teachers of Mathematics (NCTM), America’s largest group of math educators, recently stepped in with their own assessment. True, they said, the basics are important. And true, so is fun and experimentation. But the real problem, according to the NCTM, is the wide range of expectations thrown at teachers across the country and the fact that few of them seem to correlate. Because curriculum is decided by each state individually, what goes on in a 4th grade math classroom in Nebraska may be completely different than what goes on in a 4th grade classroom in New York. In some states, teachers are forced to try to cover as many as a hundred math objectives in a given school year. “Clearly,” says Skip Fennel, NCTM”s president, “each of those objectives is not equally important.”

To help deal with this curricular schizophrenia, the NCTM unveiled their Curriculum Focal Points for Pre-Kindergarten through Grade 8 Mathematics. The report outlines three essential goals for each grade level, so that teachers know where to throw their focus. Fennel points out that many teachers, especially in the younger grades, cover all subject areas, regardless of whether or not they have a background in them. “A teacher may not know all that much about math,” he says. “We’re trying to get them to understand what’s really important, so that they can teach those things deeply and well.”

As for the media’s assertion that the report signals the death of fuzzy math? Could be. It was the NCTM’s suggestions from 1989 that spurred the whole reform math movement in the first place – signaling an end to drills, memorization, and the math of yesteryear, in favor of calculators, estimation, and creativity.

But students, says Fennel, need both formulas and flexibility, both the basics and the ability to experiment. And despite the need for drills, anything parents and teachers can do to make math fun will serve our country well. The last thing America needs is another generation of children afraid of math, doing all they can do to avoid it.