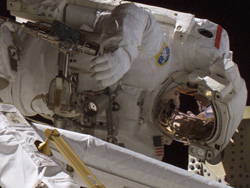 NASA's first teacher astronaut will rocket into space this summer. It's been a long time coming. Barbara Morgan, a former Idaho school teacher, first began working with the space agency in 1985, when she was selected as the backup to Christa McAuliffe for the Teacher in Space Program. She trained side-by-side with McAuliffe, who was lost with her crewmates when the space shuttle Challenger exploded in 1986.

After the accident, Morgan returned to her roots as an elementary school teacher in the little-known town of McCall, Idaho. But she also kept in touch with NASA. And in 1998, she was tapped for a new mission – the Educator Astronaut Project.

The program, like its predecessor, aims to use space to give the teaching profession some added cache and to inspire students to consider it as a career. But it's more than just a PR stunt. Unlike the Teacher in Space Program, educator astronauts train and become full-time, permanent astronauts. They're not sitting twiddling their notebooks in the cockpit – they fly as crew members and handle critical mission responsibilities, as well as education-related goals.

This June, Morgan's mission will send her to the International Space Station for a fix-it job. She'll operate the robotic arms of the shuttle and space station, as her fellow crew members install a new section of the station's truss. She'll also help in their quest to replace a failed gyroscope. It's a far cry from fourth grade.

Picturing your favorite teacher in a spacesuit? Could be. Already, NASA has selected three other educator astronauts for possible future missions. And if all goes well, others may get a crack, too. Who knows, that woman in the front of the classroom may be teaching your kids calculus today, but a few years down the road, she may be waving to them from a galaxy far far away...