A Friendship Clinic for Kids with ADHD 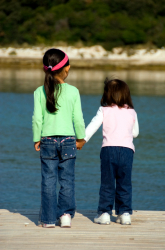 When it comes to attention deficit hyperactivity disorder (ADHD), many researchers focus on the possible causes, or on the disorder's educational ramifications. But Amori Yee Mikami, Assistant Professor of Psychology at the University of Virginia, is approaching ADHD from a new angle. Her clinical study is designed to help children with ADHD become better at making friends.

"Children with ADHD often are peer-rejected, and their difficulties multiply as they grow into adulthood," Mikami says. They can suffer through a range of problems in school – poor grades and difficulty focusing. But more than half of these children also have a serious problem forming relationships with peers, because they don't develop the social skills they need to do it.

According to the National Institutes of Health, an estimated 3-5 percent of American children have ADHD. That's 2 million children. In other words, in every class of 25-30 kids, one child will probably have the disorder.

Symptoms of ADHD include an unwillingness to cooperate, disruptive and aggressive behavior, a short attention span, restlessness, and irritability. "The child with ADHD can become stigmatized, known as 'the bad kid,'" Mikami says. "And this can lead to more inappropriate behavior. It can become a vicious cycle resulting in more social isolation."

Through her new "Friendship Clinic," she's working to reverse that cycle, by developing new methods for parents of ADHD children. Parents in the eight-week-long program learn ways to help their children play cooperatively, settle social disputes, and foster relationships. They meet for weekly 90-minute parent training sessions, three one-hour supervised playgroups, and receive "homework" assignments designed to put friend-making techniques into practice. For example, they learn to help their child choose the right playmate, to structure time for positive activities, and to intervene in a positive way when problems develop.

So far, the new skills seem to be helping. Children in the treatment group are making friends more easily, according to reports from their parents. And because the program also focuses on improving the parent-child relationship, families are seeing improvements at home as well. Parents learn to see things from their child's point of view, through a string of role-playing exercises. They also acquire techniques like "active listening," aimed at improving parent-child communication.

But mostly, the program teaches parents to be "friendship coaches," says Mikami. The skills, she says, are not easily taught, because making friends is a proactive process that does not come naturally to children with ADHD. "The idea is to help them when they're young," she says, "so they may have a lifetime of successful relationships, the kind of positive experiences that will carry over into everything they do."

Next Article: Medications Commonly Used to Treat Students with Learning Disabilities or ADHD
We enable strictly necessary cookies to give you the best possible experience on Education.com.Cookie policy