Log in with different email
For more assistance contact customer service
Parenting and Families
Family Vacations
Get Your Kid a Passport... Pronto!

Get Your Kid a Passport... Pronto! 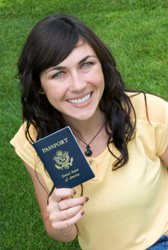 It used to be that you could slip over the border for a jug of maple syrup any time you liked, with nothing more than a driver's license or birth certificate. Canada, Mexico, Bermuda, Panama, and the Caribbean had similar rules. But ever since 9/11, the government has been talking about tightening border security. They finally did it.

Only one in every four Americans currently has a passport tucked away at home. And despite the State Department's efforts to get the word out before the big day, they didn't get the advance scramble they were hoping for in terms of passport applications. They've put 200 extra agents on the job, to help deal with the overflow.

What will happen to those poor souls who get to the airport, only to realize they need a passport to board the plane home? The State Department says they'll cut them a little slack... at least for the first few months. But penalty fees are possible, and travelers will have to wait in a long line for secondary screening. That includes kids, too.

A few more hours waiting at the airport? Doesn't sound like much of a vacation! Why not get things in order, just in case you decide on a spur-of-the-moment trip. There are over 9,000 passport facilities across the country – many of them in post offices, public libraries, or county offices. Click on the State Department's website, for more information: http://travel.state.gov/passport.