Give the Gift of Languages 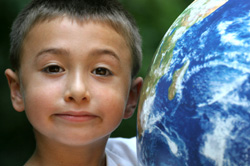 We live in an increasingly global society – our neighbor is from Puerto Rico, our co-worker from South Africa, and our child's teacher from Sweden! As adults, we often feel it's too difficult to learn a new language, but for kids, it's easy.

Time and Newsweek ran feature articles on the window of opportunity for second language learning – reported to be between birth and 10 years old. And a growing number of brain studies concur. The truth is, young children learn languages easily and retain them longer if they are exposed to them early in life. That's because when a baby is learning one word for an item, it's just as easy for his young brain to learn a second word for the same item. It grows more difficult as he gets older.

Being bilingual gives advantages beyond the joy of conversing in more than one tongue. A study by Dr. Ellen Bialystok of York University showed that children who received instruction in two languages scored twice as high on language tests than their monolingual peers. These bilingual children also read sooner and demonstrated advanced problem solving capabilities.

Latest research suggests that children learning through a bilingual format will outperform their monolingual peers in grade school as they experience advanced cognitive development. And the added benefit of learning a second language before middle school? These children will speak the new languages with native or near-native pronunciation.

The sooner you get kids started, the better. Believe it or not, at six months old a baby has the ability to learn all the languages of our world at the same time. Up until the age of five, a child still has the ability to learn five languages simultaneously. By middle school we all know learning a new language is no longer as easy as it used to be in elementary school. Children whose brains have been wired to learn languages early in life will experience advanced success in learning any language of their choice later in life.

Find a fun way to bring the language learning into your family's daily routine. Sing, dance, and play together on the road to becoming bilingual. We live in an increasingly global society. There is no better gift you can give your child than the ability to explore that world, speaking seamlessly.

Beth Butler is the creator of the BOCA BETH Language Learning Series for young children. www.bocabeth.com

Next Article: Culture and Language
We enable strictly necessary cookies to give you the best possible experience on Education.com.Cookie policy