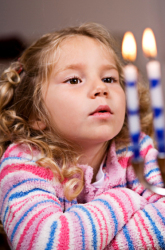 With eight nights of presents, parties and songs, gripping stories of an ancient war fought and won by a band of heroic brothers, spinning dreidels, and chocolate coins, Hanukkah is a holiday made for children if ever there was one. But while every holiday poses nutrition challenges for parents, Hanukkah can be particularly tough. The entire celebration focuses on oil and the accompanying foods can be, well, oily. Finding healthy alternatives while upholding age-old traditions may seem like an especially formidable task. Fortunately, with little extra effort, you can stick to your nutritional guns and eat your latkes, too.

First, the good news: The traditional oil of Hanukkah is heart-healthy olive oil. In fact, according to some historians, long before the Maccabees and Syrians ever battled it out in Jerusalem, the ancient Jews rejoiced this time of year with a Festival of Lights to mark the end of the olive harvest.

It wasn't until the Maccabees reclaimed the temple from the Syrians around 165 B.C. that this winter festival came to be known as Hanukkah, or dedication, in honor of the rededication of the temple. A single jar of olive oil survived the Syrian's ransacking, enough to keep the holy altar lamp burning for one day – but it burned brightly for eight. A holiday was born. To this day, Jews the world over celebrate the miracle of Hanukkah by eating deep fried foods like potato latkes and jelly doughnuts.

Despite their widespread popularity, potatoes and jelly are fairly modern interpretations of classic Hanukkah fare. We've added a few twists of our own – such as replacing regular potatoes with nutrient-dense sweet potatoes, adding apples to regular potatoes, baking instead of frying, and using whole fruit in place of sugary jelly – to up nutritional content and minimize the damage of eating these delectable treats eight days in a row.

Hanukkah is full of distractions, but preparing delicious and wholesome celebratory foods together provides the perfect opportunity to share with your children the story of Hanukkah, lessons about making healthy – or at least healthier – food choices, and the moments lifelong memories are made of.

Sweet potatoes, often called yams, are packed with beta carotene, vitamin C, manganese, copper, vitamin B6, potassium, iron, and dietary fiber. Replacing regular potatoes with these nutrition powerhouses makes for nutrient-rich latkes. We recommend using dark orange-fleshed garnet or jewel yams for this recipe, but any type of sweet potato will do. Have your children help by peeling the sweet potatoes and measuring and mixing the ingredients, but keep them away from the hot stove during cooking.

In a large, heavy-bottomed skillet, heat about 2 tablespoons of oil over medium-high heat. Drop the batter by large spoonfuls into the skillet, flattening with a spatula to make pancakes about 3 inches across. Cook until browned on the bottom, about 2 minutes. Turn pancakes over and cook another 1 1/2 to 2 minutes or so until browned on the second side. Repeat process with remaining batter, adding more oil to the pan between batches as necessary. Drain on paper towels before serving. Serve latkes hot with applesauce or sour cream.

Make potato latkes healthier by adding vitamin- and fiber-rich apples to the potato cakes, spraying them with olive oil, and baking rather than deep-frying them. Kids can be in charge of peeling the potatoes and apples, squeezing the moisture out of them after they've been shredded and drained, and mixing all the ingredients together. They can also help in forming the cakes and spraying them with oil. Serve them topped with low-fat sour cream or applesauce.

Spray a large nonstick baking sheet with olive oil (you can hasten the total cooking time if your oven can accommodate two pans side by side).

Trim off the root end of the leeks and remove any dark or ragged outer leaves. Trim off the dark, coarse part, leaving only the white and light green portion of the leek. Split these light-colored portions in half lengthwise and thinly slice. Place sliced leeks into a bowl and cover with cold water. Slosh the leek slices around a bit to make sure the dirt is removed from between the leaves. Lift leek slices out of the water and into a colander to drain. If the leeks are very dirty, you may need to repeat this process.

Peel the potatoes, and peel and core the apples. Using the fine shredding blade of a food processor, shred the potatoes and apples then place them in a colander, sprinkle with a little salt, and set in the sink to drain for at least 20 minutes. Turn potatoes and apples out onto a double thickness of paper towels or a clean, dry dish towel and squeeze out excess moisture.

Using your hands, drop mixture onto prepared baking sheet(s) forming thin, flat patties about 3 inches across. Spray cakes lightly with olive oil and bake on the center rack of the oven until golden brown on the bottom, about 10 minutes. Turn cakes over and bake about 7 minutes longer, or until crisp and cooked through. Transfer cooked latkes to a platter and cook remaining batches in the same manner as the first. Before serving, reheat the previously cooked latkes in the hot oven for about 4 minutes.

In place of jelly doughnuts, try serving pear fritters for dessert. They may still be deep fried, but you'll sneak in an extra serving of nutritious whole fruit. Children can help with peeling the pears and sifting, mixing, and dusting the cooked fritters with powdered sugar. But because the oil is very hot, keep children away from the stove during cooking.

In a large bowl, sift together flour, baking powder, granulated sugar, and salt. Add milk and egg and beat until batter is smooth. Stir in pear and mix until well combined.

Fill a large, heavy pot with vegetable oil to a depth of 1 1/2 inches and heat the oil until it registers 375 degrees Fahrenheit on a deep-fat thermometer. Carefully drop the batter by large spoonfuls into the hot oil in batches and fry for about 1 to 2 minutes per side until golden brown. Lift fritters from pan using tongs or a slotted spoon and transfer to paper towels to drain. Sprinkle with powdered sugar just before serving.

Next Article: The History of Hanukkah
We enable strictly necessary cookies to give you the best possible experience on Education.com.Cookie policy