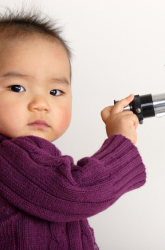 The chances are good that when you wish upon a star, you’re hoping that your children will grow up to be smart, well-educated, and interested in the world around them. Well, our solar system is a great place to start. Kids who study astronomy learn about physics, geology, geometry, and history, all while enjoying natural beauty.

Of course, those of us whose knowledge of the universe involves a moon and some green cheese can find astronomy a little intimidating. There’s a reason science fiction movies take place in “a galaxy far, far away” and not on a ball of hot gas 23.5 trillion miles from Earth.

Relax. You don’t need to be a rocket scientist to talk about rockets. There’s time for your kids to learn the nitty gritty. For now, focus on making astronomy fun.

First, the basics. If you live in a city, your child may never have gotten a good look at the stars in all their glory. Why not pick a clear night, pack a picnic, and hightail it as far away from the city lights as you can get? Nature preserves are great spots for star gazing, no telescope required. In fact, many experts suggest that unless you’re ready to invest a small fortune, telescopes aren’t worth the money; you’ll do just as well with a less expensive pair of binoculars.

Of course, stars aren’t just eye candy; for thousands of years, they were the closest things our ancestors had to a map. Ancient sailors used the North Star as a beacon to safely cross the sea; American slaves followed it to freedom in Canada. Teach your little one to navigate compass-free by locating Polaris, the North Star, from anywhere in the Northern Hemisphere. Find the last two stars at the bottom of the Big Dipper's cup and imagine a line drawn straight through them towards the much dimmer star at the end of the Little Dipper’s “handle” – that’s Polaris.

If you’ve succeeded in piquing your child’s interest, try bringing the constellation to a galaxy a little closer to home. Cloud B’s Twilight Turtle, a nightlight that projects an accurate picture of the solar system onto the ceiling, makes a wonderful nightlight for young children. Older kids can print out a map of the solar system and paste glow-in-the-dark stickers of the stars and planets on their walls. Sure, it’s messy – but hey, at least they’re not made of green cheese.

Further Resources: http://www.nasa.gov/audience/forkids/kidsclub/flash/index.html – The official website of the NASA Kids’ Club, with lots of ideas for space-themed projects.

http://www.nasm.si.edu/ – The official website of the National Air and Space Museum in Washington, D.C., with lots of online activities for kids and free educational posters.