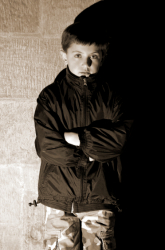 School should be a safe haven, free of crime and violence. But that's not always the case according to a new report out from the National Center for Education Statistics (NCES).

The study, Indicators of School Crime and Safety, is the ninth in a series of annual publications produced by the NCES and a handful of government agencies. It aims to show what students face when they enter the schoolyard. And it covers a wide range of education topics most parents don't like to think about – victimization, fights, bullying, weapons, drugs, and alcohol.

Parents who think of school as a place where a child's biggest problem might be someone stealing his lunch have some catching up to do. Today's students have bigger fish to fry. In 2004, students aged 12-18 were victims of about 1.4 million nonfatal crimes at school, including about 863,000 thefts, 476,000 violent crimes (like simple assault), and 107,000 serious violent crimes (rape, sexual assault, robbery, and aggravated assault). Fifty-five out of every 1,000 students in America, aged 12-18, were victimized in 2004. This is compared to 73 in 2003. So the numbers have gone down a bit – a small consolation, but a consolation nonetheless.

As for school being a haven? The study found that students aged 12-18 were more likely to be robbed in school, than away from school. One in 10 male high school students reported being threatened or injured with a weapon on school property in the past year. Almost one in four students reported the presence of gangs in their schools. And one-quarter of all high school students had been offered drugs on school property.

The biggest problem on students' minds though is bullying. Almost 30 percent of middle and high school students reported having been bullied at school during the last six months. And for many, it was reason enough to avoid school altogether.

We all want school to be a safe harbor for our children. But that is sadly not always the case. If you've been functioning under the assumption that not much has changed since you roamed the halls, it may be time to reevaluate that assumption. Talk to your kids about their school. Let them know you're listening and that you take their fears or concerns seriously. Because no child should have to be afraid in the schoolyard – whether they're 8, or 18.

Next Article: School Violence: What You Need to Know
We enable strictly necessary cookies to give you the best possible experience on Education.com.Cookie policy