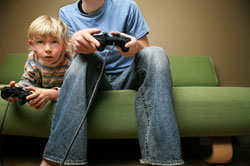 The Federation of American Scientists (FAS) has proclaimed that kids need more, not less, video games. The group, formed in 1945 by a collection of atomic scientists fresh off the Manhattan Project, usually concerns itself with bigger issues – national security, nuclear proliferation, or humanitarian problems. But now they’ve set their sights on something much closer to teenager’s hearts.

Their report, based on advice from nearly one hundred education, science, and game industry experts, calls on the federal government and the Departments of Education and Labor to fund video game research and development. Video games, they argue, hold the potential to help address one of America’s most pressing problems – preparing students for an increasingly competitive global market.

Video games provide more than fun, according to the FAS. They “can teach higher-order thinking skills such as strategic thinking, interpretive analysis, problem solving, plan formulation, and execution, and adaptation to rapid change.” With many technology companies farming out lower-level work to countries where employees come more cheaply, these are the sort of skills American students will need to possess once they hit the workforce."

Next Article: Are Video Games Educational?
We enable strictly necessary cookies to give you the best possible experience on Education.com.Cookie policy