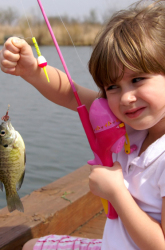 Which fish belong on your plate, and which should you avoid? Is crab safe after the recent Bay Area oil spill? Is sea bass over-fished? Between safety issues and environmental ones, there's a lot to consider before putting seafood on the menu.

The Monterey Bay Aquarium's "Seafood Watch" advises consumers which fish to throw in the pan and which to avoid. According to the list, not all fish are equal when it comes to your family's dinner table. Pacific halibut, farmed mussels, wild Alaskan salmon, Dungeness crab, and others are a big "Yes!" according to the aquarium. But when it comes to Chilean sea bass, farmed Atlantic salmon, red snapper, blue fin tuna, and any type of shrimp, things get a bit fishier.

Katherine Burnham of the Environmental Defense Network, which develops health safety standards for fish, agrees. True, health experts extol the virtues of fish oils. But, says Burnham, "Some fish are full of Omega 3s, but they're also overflowing with toxins. We don't think anyone should eat those. And the health implications for young people are even greater." She urges families to pick fish that's not only good for you, but also good for the oceans.

Interestingly enough, the two often go together. For example, many of the fish on the Monterey Bay Aquarium's "avoid" list are the same fish that doctors and health organizations have given the red light. These predatory fish tend to get loaded up with mercury and other nutritional dangers – making them a safety hazard, as well as a bad environmental choice.

Can your shopping choices really make a difference? According to these experts, yes. Less than a decade ago, hundreds of thousands of dolphins were routinely caught in tuna nets. The fisherman chalked it up to unfortunate by-catch, and didn't think much about it. But after the public found out about it and consumers began clamoring for change, the industry was forced to adjust their methods.

Teaching kids how to be kind to the earth is an important lesson in stewardship. And the lesson can start with what's on their plate, and why. "It's important for young people to have the idea of growing into ocean protectors," Burnham says. "They need to know that the ocean is not a big supermarket. It's part of a giant eco-system and all animals and plants play a special role. Kids need to learn that what we put into the ocean can come back to us in the food we eat."

With the recent oil spill in the San Francisco Bay Area, that's just what many parents are worried about. Sam Delson of the California Office of Environmental Health and Hazard Assessment department says, "We tested more than 1,000 crab, mussels, herring, and surf perch and we found all of them were as safe as before the oil spill, with the exception of mussels around the Berkeley marina and Rodeo Beach in Marin County. Mussels are the most vulnerable because they have slow metabolism and they can't process contaminants and get rid of them easily. Trout and salmon are the safest local sport fish." He says the fish in the Bay is safe. Plus Delson says, "Crab is cheap now. Down to $5 a pound."

While an environmental disaster is never something to celebrate, the oil spill in the Bay does offer a teaching opportunity for parents. Sheila Bowman, Outreach Manager of Seafood Watch, says "All that we get from the ocean...is dependent of the entire system functioning as it has for millions of years. I think the teaching opportunity with the oil spill is perhaps the amount of impact humans and out activities can have on the earth. Beyond the actual spill is the aftermath of floating oil, the impact on birds and other animals and even us humans who want to enjoy the out of doors."

It's never too early to teach kids the impact they have on their environment-- both good and bad, Bowman says. "It's because we humans have the ability to do so much damage that we have the responsibility to take such good care."

To search with your kids for responsible fish choices by region, go to www.mbayaq.org and click on "Seafood Watch."