The Lowdown on Single-Sex Education 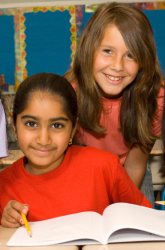 Not long ago single-sex schools were viewed as relics from another age, a time when boys took woodshop and girls studied home economics. Now the pendulum is swinging the other way. Legislators are considering funding single-sex public schools, and single-sex private schools are back in vogue. Why?

Call it Mars and Venus in the classroom. Experts say that boys and girls simply learn differently, and that ignoring inborn differences shortchanges both sexes. According to these experts, girls tend to mature faster both socially and physically, and to develop language fluency, fine motor skills, and understanding of abstract concepts before boys do. Boys gain large motor control sooner, tend to be more literal than girls, and excel at spatial relationships. Perhaps more important, boys and girls behave differently.

“The behavior expected (and rewarded) in the classroom – quiet, patient, orderly acceptance of facts – favors how girls approach their classes,” says Michael Obel-Omia, head of Upper School at University School in Hunting Valley, Ohio, which is all male. Like many, Obel-Omia believes boys enter coed schools at a disadvantage to girls, and may be shortchanged by a one-size-fits-all program.

Conversely, proponents of all-girls’ schools say that deep-rooted sexism cheats girls in coed programs. Studies have shown that teachers call on girls less often than boys, and girls report feeling inhibited about speaking up in class. By removing the social pressure to impress the opposite sex, the reasoning goes, girls feel free to take more risks.

Although long-term research is lacking, anecdotal evidence seems to bear this out. Girls in single-sex schools are more likely to take math, computer science, and physics classes, as well as play sports, than their peers in coed schools; boys are more likely to study art, music, drama, and foreign languages. Some evidence suggests that boys in all-boys’ schools are less competitive and more cooperative, which has led some to push for single-sex public schools in low-income areas.

Of course, we live in a coed world, and eventually everyone has to learn to work together. “With an all-girls’ school you really need to take the initiative in finding male friends,” notes Katharine Krotinger, a senior at the all-female Dana Hall School in Massachusetts. Otherwise, students of both sexes can feel like a fish out of water when they reach a coed college or the workplace.

Only you and your child can predict whether a single-sex school will be an educational haven or a social desert. As for Krotinger, she’s looking forward to starting college in the fall – on a coed campus.

Next Article: Forget 8am-3pm: Here Comes the Longer School Day
We enable strictly necessary cookies to give you the best possible experience on Education.com.Cookie policy