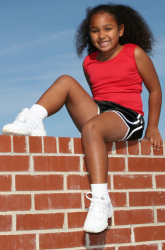 Collect This Article
5.0 based on 1 ratings
by Education.com

The numbers are scary. One-third of all U.S. children are either overweight, or dangerously close to becoming so. Since the 1970s, the percentage of overweight preschoolers has more than doubled, and it’s more than tripled in 6-11 year olds. This may not seem like that big a deal, but obesity can bring serious health problems – type 2 diabetes, asthma, hypertension...

Here’s the good news: according to a study by the nonprofit organization, America on the Move, children struggling with obesity don’t need to make huge life changes to see results.

A study of 200 families with at least one overweight child, recently published by the organization, found that cutting just 100 calories a day and walking just 2,000 extra steps, made a big difference. Two-thirds of the group that made those changes either maintained or reduced their Body Mass Index (BMI).

Where Can Families Begin?

Next Article: Childhood Obesity
We enable strictly necessary cookies to give you the best possible experience on Education.com.Cookie policy