A Trading Card for Girls Only 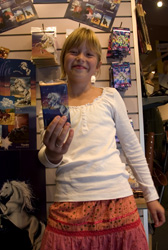 Finding a toy for your daughter isn't always easy. Even if you dream of courting her inner geek – pushing her towards chemistry sets and Lincoln Logs, the truth is that many of her friends will be toting dolls. And your daughter will probably join them – at least sometimes.

Part of that has to do with the fact that dolls reign supreme in the "girl" toy aisles. Boys have action figures and video games, matchbox cars and baseball cards, but for girls, the choices are more limited.

Toy mogul Peter Adkison, the guy who brought us Pokemon and Magic: the Gathering card games, wants to change all that. He's just released Bella Sara,  the first line of trading cards aimed specifically at girls.

Adkison knows toys – in addition to Pokemon and Magic (which sold over $100 million in its first two years alone), he published Dungeons & Dragons. He's never quite tapped the girl market, but his "new" line has already sold over 6 million cards in Scandinavia, where they were first created.

Aimed at girls ages 5 to 12, the Bella Sara cards feature feel-good messages like "Believe in yourself. Have confidence in what you do" or "Listen to your dreams. What they tell you is important." The idea for the cards came from Gitte Odder Braendgaard, a former social worker in Denmark. When Adkison first saw them at a trade show, he says, "I instantly fell in love."

Girls are too often given toys that focus on looks as the only way to have power or self-esteem, Adkison says. "I want to reinforce the idea that beauty comes from within. Bella Sara features qualities like introspection, cooperation, perseverance, and respect – it helps parents bring up deep issues."

Will girls collect cards with the same zeal as their brothers? Only time will tell. Will they go for a pile of horses with manes swaying in the breeze? Unclear. But if nothing else, Adkison says, it will do one thing. "It will help girls talk to each other about big things, not just hair."

Next Article: Guys and Dolls: Reducing Gender Stereotypes in Your Home
We enable strictly necessary cookies to give you the best possible experience on Education.com.Cookie policy