Log in with different email
For more assistance contact customer service
Parenting and Families
Discipline
What Kind of Disciplinarian Are You?

What Kind of Disciplinarian Are You? 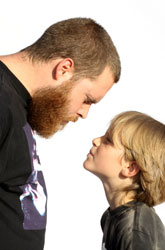 Collect This Article
2.7 based on 11 ratings
by Education.com

“Don’t touch that.” “No hitting.” “Stop whining.” Often it can seem like your day is filled with endless reprimands for your children. While there is no one right method to deal with whining, back talk, or bad behavior, the approach you take can shape a child in subtle ways. There are three main styles of discipline parents practice: authoritarian, authoritative, and permissive; and experts say each can have far-reaching impact, even after childhood is a distant memory.

The 3 Types of Parents

Authoritarian
In an authoritarian parenting style, the parent is the boss. A child is meant to listen without questioning, simply because the parent is the authority. If a parent tells a child to pick up her toys and the child asks why, an authoritarian parent would say something along the lines of, “Because I’m the grown-up and I make the rules.” There may be an immediate benefit –- the child heeds the instruction and then does what she is told in order to please the parent. But the repercussion could be a fear of the parent from an early age. And in turn, a fear of other authority figures.

According to Patty Wipfler, founding director of Hand in Hand Parenting, a nonprofit focused on improving parent-child relationships, it’s up to the parent to decide which discipline style gels with their personality, but “a sense of connectedness between the parent and child is what parents should be focusing on.” Wipfler says authoritarian parenting may yield obedient children, but it also may yield kids who are aggressive, have difficulty building healthy peer relationships, or become withdrawn from activities if they have the possibility of bringing rejection. In general, children of authoritarian parents have a harder time with social relationships, according to Wipfler.

Authoritative
The second discipline style sounds a lot like the first. But although the names are similar, the approaches are quite different. An authoritative parent sets limits and makes rules, but not without explaining why they exist. Then when the rules are enforced, the child has a basis for understanding why his actions led to any disciplinary result. For example, if a child hits, an authoritative parent may say, “Hitting is not okay,” but then, once they’d laid down the law, they’d explain that “hitting hurts others… when you hit him you made him cry.” This allows a child to see the consequences of his actions. The parent might then have their child apologize if he’s old enough to understand that concept.

Wipfler, an advocate of the authoritative style, says she likes it because “parents listen and create some modified version of democracy, and the child’s view points are heard.” Lines of communication between parent and child are open, fostering confidence. By supporting the child while they are having an emotional moment and letting the child "offload that upset with you", parents help a child become stronger and surer of himself.

Permissive
Permissive parents are the polar opposites of authoritarian ones, believing that a child should have the right to find his own way in the world. Permissive parents let children set their own limits. Some refer to this as "laid-back" parenting. And often other parents observe this style and think: “Maybe I’m too uptight with my kids. I should be more mellow.” While letting a child "figure it out" is a championed strategy, a lack of guidance from the parent can have ramifications. Too much leniency early on can actually create a child unable to trust grown-ups later. Wipfler says that when no reasonable limits are set and there is “no closeness for emotional release for the child, the child’s behavior can become farther from the norm as they signal that they need help.” These children may never respect authority or learn how to make their own choices.

Whether you are clearly one style of disciplinarian or another, or a little bit of each, find a way to discipline that works for you, and for your child as well. Wipfler says, “If a child’s needs are met, you’ll have a child who knows themselves, is confident, and turns to you during his hardest times.” No pressure, but as parents, you are pretty much their whole world. They are going to look to you for direction – and that’s the way it should be.