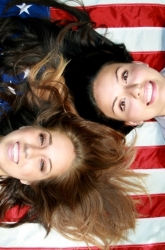 With this being an election year the nightly news is dominated with talk of who's ahead in the polls, primary and caucus results, and campaign updates. In the midst of it all, are our teens watching? Do they care what is happening on the political scene? Or understand it? And, with often confusing talk of delegates and superdelegates, caucuses and the electoral college, do we as parents understand the electoral process well enough to discuss it with our teens?

The interest and involvement of young people in this election has actually increased significantly over recent years. As Matt Smyth, Director of Communications at the University of Virginia Center for Politics puts it, "Modern elections are becoming increasingly relevant to young people. Young people are being provided more and more opportunities to have their voice heard." And it seems they are taking advantage of it.  According to the Center for Information & Research on Civic Learning and Engagement, or CIRCLE, youth turnout has been much higher in the 2008 primaries than in recent years. In some states, youth turnout has tripled or quadrupled.

Even teens who are not yet 18 may have an interest in political issues. As Karlo Marcelo, a research assistant at CIRCLE, says, "Voting is just one way to get involved electorally. Young people can also volunteer for political campaigns, donate money, persuade others to vote, and display political buttons/stickers/signs.  So, [even] young people that are not 18, can still get involved."

But there's no denying that electoral jargon is confusing, even to many adults. For parents seeking some help unraveling the election terminology, here's a breakdown of often-heard terms.

Super Tuesday: What's so 'super' about it? Well, this year it was the biggest day of primary voting in the 2008 election calendar. On February 5 this year, 24 states held primaries or caucuses to select delegates to the national conventions.

Caucus: A caucus is simply a meeting of supporters or members of a political party, who assemble to begin the process of selecting party delegates which will attend the party conventions. Beyond that, things get complex. There are few rules governing the caucus process, which varies markedly between Democratic and Republican groups, and from state to state.

Delegates: Delegates are individuals chosen to represent their states at their party conventions prior to the presidential election. Rules for choosing delegates are dictated by the parties, not the federal government; they are also complex and can vary greatly between parties and from state to state.

The Democratic Party has two types of delegates. Pledged delegates are elected or chosen at the state or local level with the understanding that they will support a certain candidate at the Democratic Convention, although they are not actually bound to vote for their 'chosen' candidate.

Superdelegates are elected officials who are usually high-level members of the Democratic Party – governors, members of congress, National Committee members, or party leaders (like former presidents or vice presidents). Superdelegates comprise 796 out of the total 4049 delegates, or about 20% of overall delegates. They are not obligated to indicate a preference for any candidate. They can pledge support to one candidate and then change their minds later. To become the Democratic presidential nominee, a candidate needs to win 2025 out of the 4049 total delegate votes.

The Republican Party also has two types of delegates: pledged and unpledged. Out of 2380 total delegates, 1917 are pledged and have to indicate support for a certain candidate at the Republican Convention. Like Democratic delegates, they are usually elected or chosen at the state and local level. The unpledged Republican delegates are free to vote for any candidate and are not bound by the election results of their states. To win the Republican presidential nomination, a candidate has to win 1191 delegate votes.

Primary election: This is an election during which Democratic and Republican party members vote on who they want to be their party's presidential candidate. Primary elections serve to narrow down the field of candidates.

General (or popular) election: On the Tuesday following the first Monday of November, millions of U.S. vote to elect, among other officials, the next president and vice president. However, when a person casts a vote in the general election, they are not voting directly for an individual presidential candidate. Instead, voters in each state actually cast their vote for a group of people, known as electors. These electors are part of the Electoral College and are supposed to vote for their state's preferred candidate.

Electoral College: Each state has a number of electoral college votes, depending on population and representation in Congress. California has 55 while some smaller states have 4. There are 538 presidential electors, and a presidential candidate needs 270 electoral college votes to win the presidency. The Constitution does not require the electors to vote as pledged, but many states do. Winning the popular vote may not ensure a candidate's victory, and the goal of each candidate is to win over the right combination of states that will give him or her 270 electoral votes. If there is no majority winner after the electoral college vote, the US House of Representatives votes to determine who the next president will be. Party

Conventions: After the primaries and caucuses are over, during the summer before the general election, each party holds a convention during which their nominees for president and vice president are formally chosen. This year, the Democratic National Convention will be held in Denver, CO from August 25-28, and the Republican National Convention will be held in Minneapolis, MN from September 1-4.