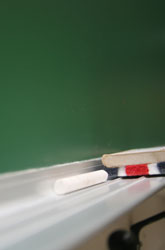 The historic economic stimulus package took a topsy turvy route from inception to approval by President Obama last week. The final measure topped out at $787 billion, with a total of $130 billion directed towards education.

When the original bill left the House two weeks ago, it included $177 billion in funds for education. Republican members of the Senate sought to make cuts in what they saw as a bill laden with fat that would not work to stimulate the economy. Education spending took a hit, especially the money reserved for school construction, with Republicans arguing that maintaining buildings should be the job of states and districts.

An amendment to the bill offered by Sen. Ben Nelson (D-Nebraska) and Sen. Susan Collins (R-Maine) brought the price tag for education down to $97 billion. However, a series of negotiations and hard battles on the part of Democrats restored much of the education money. The sticking point was school construction; Republicans expressed concerns that if the federal government starts funding school construction now, it would set a precedent for funding such projects in the future: not a good idea, they say, for a government facing trillions of dollars in debt. Not surprisingly, the $25 billion originally reserved for school construction did not survive negotiations, and was removed from the final bill.

“A lot of money did come out of education,” says John Laughner, legislative manager for the Committee for Education Funding, a nonpartisan and nonprofit education coalition. “The conference committee was scrambling to find money for school construction without increasing the size of the bill.”

They did find, and successfully negotiate for, some funds to go towards school buildings. Language was written into the bill allowing states to use money in the state stabilization fund for their construction needs, though that only includes modernization of existing buildings, not new construction. They also found some tax break money to put towards school bonds; with the bond market frozen due to the financial crisis, many schools have had a difficult time selling their bonds.

“Education came out pretty good during negotiations,” Laughner says “We were very encouraged to see Senators go to bat for education.”

Though education went through some rough and tumble times during these policy wars, analysts agree that $130 billion is not too shabby. Because it is part of the stimulus package, the money needs to be spent over the next two years. Here are some highlights on how the money breaks down:

According to Jim Bradshaw, a spokesman for the Department of Education, the goal is to get half of this money to states within the next 40 days, and the other half out the door within 6 months.

The DOE will develop a timeline for distribution within the next week, Bradshaw says. “Our job now is to tell states how to get the money and how they can apply to the funding. That’s still a work in progress,” he says.

Timing is a huge issue for many cash-strapped states, who have had to revise their budgets in the middle of the school year as a result of the financial crisis, and are chomping at the bit for stimulus money. If the checks start rolling out in March or early April, it can be used to stave off the cuts for the current school year. In many cases, that means schools that have announced lay-offs won’t have to follow through, according to Mike Griffith, senior school finance analyst for the Education Commission of the States, a nonprofit and nonpartisan organization for state officials that oversee education. “They’ve been holding off hoping fed money will come through. If the money comes in time they’ll be able to make themselves whole, if it doesn’t come through until May, June or July they’ll have to make the cuts,” he says.

How do schools determine where to cut? According to Griffith, 65 percent of school budgets go to teacher salaries; another 15 percent goes to support staff; and the remaining 20 percent covers everything else, from textbooks to gas for the school buses. “Most districts are going to start with that 20 percent,” he says. “What they tend to cut first are purchases—textbooks, new equipment, new technology—because you can continue on with your school year without these things.”

After purchases, districts tend to cut the extra activities such as field trips and sports. “They might implement ‘pay for play,’” says Griffith. “And they might cut transportation. They’re doing all of this in an attempt to not impact the classroom teachers.”

In some cases, schools might have to just cut their losses this year, and look towards a better funding scheme for the 2009/2010 school year. Schools will need to know how much money they’re getting by July, so that they can figure out who they’ll be hiring back next year. “I have been fielding phone calls like you wouldn’t believe from states asking when they will receive the money,” Griffith says.

Not only is there a concern over how soon the money will start flowing, but what will happen when that flow is suddenly cut off in two years. Rick Hess, director of education policy studies for the American Enterprise Institute, a nonprofit and nonpartisan research group, says though the stimulus money is labeled “temporary”, funding like this sets a precedent that the federal government can’t afford. “It’s a lot of borrowed money which serves only to plug temporary gaps and sustain irresponsible and unreflective spending,” he says.

Laughner agrees that the feds won’t be able to backtrack on a lot of the funding, nor should they. “Many legislators are asking, ‘What are we going to do when this money runs out? How are we going to go back to previous levels for IDEA?’ The answer is you really can’t. The federal government already promised this money,” he says.

Many education policy analysts believe the stimulus bill will forever change the federal government’s role in education funding. Prior to this bill the government provided approximately 9 percent of all education spending.  The Education Commission of the States estimates that the bill will increase federal spending on K-12 education between 14.8 percent and 15.5. percent over the next two years.