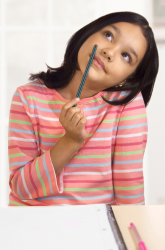 Fourth grade science can be divided into two broad categories: processes and concepts. Science processes include observing and measuring objects, organisms, and/or events; classifying objects, organisms, and/or events using two or more observable properties; arranging items in serial order (for example, least to greatest or fastest to slowest); planning and conducting a science experiment; using a hypothesis; interpreting graphs, charts, and tables; and communicating the results of a science experiment.

Science concepts your child will learn this year include how the position and motion of an object can be changed by pushing or pulling; how motion can be described by tracing and measuring; how the flow of electricity is controlled by open and closed circuits and the role of conductors and insulators; the adaptive characteristics of organisms, how organisms can be classified, and the roles of organisms in a living system; inherited traits versus learned traits; the processes of erosion, weathering, and sedimentation; and fossils as evidence about plants and animals that lived long ago.

Whew! That's a lot to cover in a school year! Curriculum varies from state-to-state. But there are some constants across state borders, typical to the fourth grade classroom. By the end of the school year, students working at the standard level:

Adapted with permission from "Fourth Grade Success: Everything You Need to Know to Help Your Child Learn" by Amy James (Jossey- Bass, 2005), which we highly recommend.

Next Article: How to Get Your Girl Into Science
We enable strictly necessary cookies to give you the best possible experience on Education.com.Cookie policy