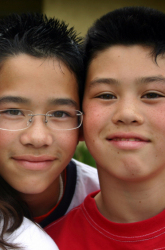 “Self-esteem” is one of the buzzwords of modern parenting, tossed about as a panacea for everything from sexual promiscuity to teen suicide. Unlike tetanus shots and spanking, however, it isn’t an either/or proposition: parents begin nurturing their children’s self-esteem at birth, and it ebbs and flows over time. Still, fifth grade is a great stage to focus on self-esteem. "Children in fourth, fifth, and early sixth grade are beginning to try to figure out where they 'fit-in,' and parents, teachers, and peers begin to put restrictions on them to, as they perceive it, help them to fit in," say Valerie Krahe and Cynthia Gannon of Confidence Coaching, LLC.

Both boys and girls struggle with self-esteem, but they face different challenges. Here's what to keep in mind if you're the parent of a fifth grade boy:

Whether you have a fifth grade son or daughter, it’s important to remain supportive and listen. Remind your child that, no matter what her peers say, character counts more than appearance and popularity.

Next Article: Less is More: Reduce Rules and Structure to Free the Minds of Boys
We enable strictly necessary cookies to give you the best possible experience on Education.com.Cookie policy