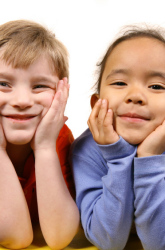 Although every human being is unique, researchers have pinpointed differences in male and female brain development and hormone levels that affect children’s learning styles. According to Michael Gurian and Kathy Stevens, authors of The Minds of Boys: Saving Our Sons from Falling Behind in School and Life, here are some of the neurological differences you may notice in the years ahead:

Although the study of neuroscience is growing by leaps and bounds, the human brain is still largely a mystery. However, the differences between male and female brain development can go far in explaining why girls and boys learn differently, and how to capitalize on the skills of each. If your daughter is struggling to decipher a sequence of numbers, for example, she may benefit from talking through it aloud. Likewise, boys may have difficulty remembering a story or word sequence, but acting the story with movements should help the lesson stick.

Next Article: Gender Differences: Kindergarten
We enable strictly necessary cookies to give you the best possible experience on Education.com.Cookie policy